You are at:Home»Current in Carmel»Carmel Business Local»Clay Terrace owner aims to proceed with redevelopment plans despite report of possible bankruptcy filing

Clay Terrace owner Washington Prime plans to move forward with redevelopment of the Carmel shopping center despite reports that the company is preparing a potential bankruptcy filing.

On March 4, Bloomberg reported that Columbus, Ohio-based Washington Prime, which owns approximately 100 shopping centers in the U.S., is considering filing for Chapter 11 bankruptcy protection after skipping an interest payment on its debt and not yet reaching a resolution during negotiations with lenders.

Officials from Washington Prime declined to comment, and an official from Clay Terrace did not respond to a request for comment.

Carmel Mayor Jim Brainard confirmed March 9 that a Washington Prime official has indicated to the city that the company remains committed to the Clay Terrace redevelopment project and is finalizing deals with residential and hotel developers. 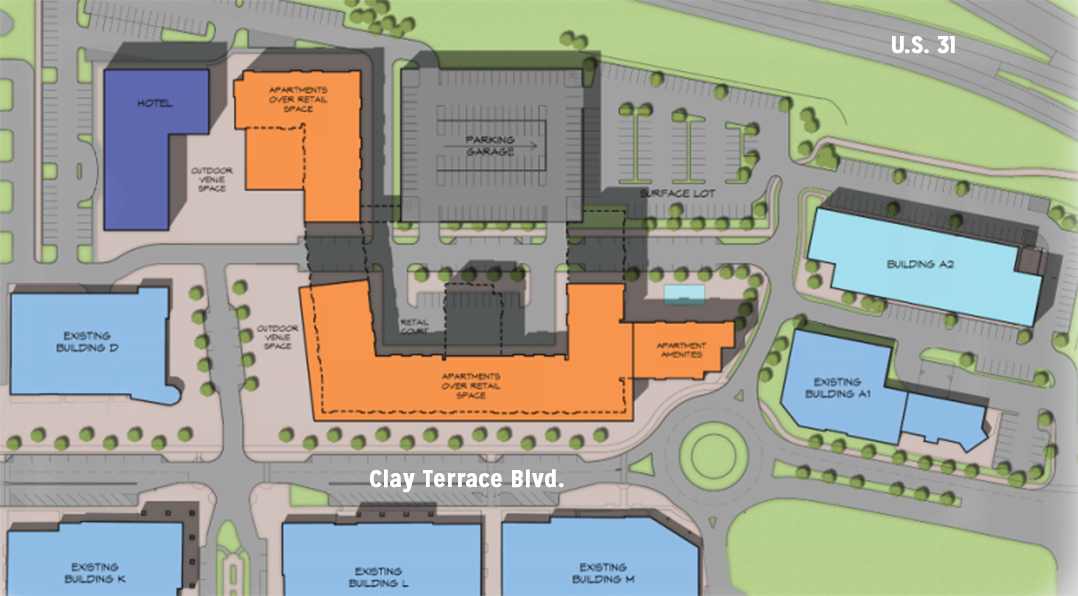 A concept plan shows the proposed location for a hotel, apartments and a parking garage at Clay Terrace. (Submitted image)

Washington Prime filed plans to redevelop a portion of Clay Terrace to include residential units, a hotel, parking garage and other improvements just as the COVID-19 pandemic took hold in early 2020. The pandemic initially delayed those plans, but several months later, a representative for Washington Prime stated in documents filed with the city that the pandemic brought more urgency to transform the shopping center to include a greater variety of uses.

The Carmel City Council approved plans to redevelop Clay Terrace at its final regular meeting of 2020. Washington Prime has not revealed a timeline for redevelopment of Clay Terrace, and it’s not clear how a bankruptcy filing would alter it.

Brainard said a Chapter 11 bankruptcy for a company like Washington Prime is not surprising amid a pandemic that has dealt a heavy blow to the retail industry, and he expects Washington Prime to make a solid post-pandemic recovery.

“(The potential bankruptcy filing) would be a very typical thing to happen in a pandemic like this where retailers have been closed,” Brainard said. “It’s a good, sound company. Once those retail stores reopen and start paying rent again, I imagine Washington Prime will be just fine.”

Clay Terrace, like most shopping centers, sat nearly empty last spring when Gov. Eric Holcomb ordered a statewide lockdown to prevent the spread of COVID-19. As restrictions lifted, retailers began reopening, but some closed for good.

Bloomberg reported that Washington Prime’s rent collection rate dropped to 52 percent during the second quarter of 2020 but that collections improved to 87 percent for the third quarter.