“In August 2019, I was involved in a life-altering water-sport accident that permanently severed three finger digits (both middle fingers and pointer finger of the left hand),” the 2017 Fishers High School graduate said. “While tragic, this accident taught me that life is too wild and unpredictable to sit on passion. Over the next year, I balanced school and learning to produce electronic music.”

“What really catalyzed my wanting to know more about music production is that accident, because it affected my ability to play guitar and violin,” Picard said. “So, I started thinking about making music. The second catalyst was the (COVID-19 pandemic) hit. We suddenly had a lot more time to be alone and a lot more time stuck at home, so naturally, my learning of production accelerated during that time period, too.” 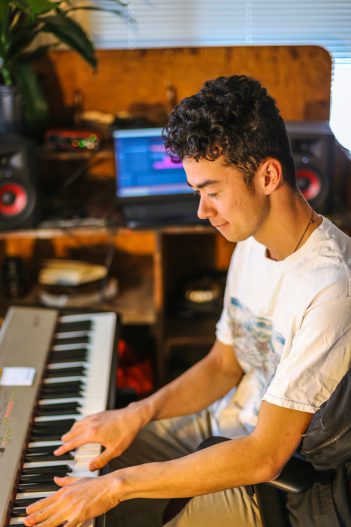 Picard had taken piano lessons since he was 5 years old.

“It was a tough recovery process, but I think I’m back to where I was before playing the piano, which is cool,” he said. “I did play violin and guitar before the accident and I didn’t take (time) to relearn those yet. I think it would be possible but much harder than piano.”

Picard said when he and Ben Rich started to room together and got to know each other better, they learned they shared a passion.

“I saw Matthieu really get into dance music and producing,” said Rich, who is from Elkhart. “I was already in a band called Levine, singing and playing guitar. It was fun making music together.”

The duo began making music under the name SD Gloria.

“The name SD Gloria derives from Soli Deo gloria, a Latin term used by Bach to point all glory to Christ,’” Picard said. “As two followers of Christ, we are always happy to share about our faith with anyone curious to learn about its source.”

Picard and Rich met during their freshman year through Cru campus ministry for Christians.

“We actually have fairly different tastes in music, but we align,” Picard said. “I grew up with classical music. My mom would play with me and my dad taught bass lessons. I got into electronic dance music in high school.”

Rich said he wasn’t as interested in dance music before working with Picard. Rich’s background was more classic rock, along with indie rock and alternative rock.

Picard was involved in orchestra at FHS, playing mostly violin and some piano, and playing with the worship team at Campus Crusade.

The three tracks released on Spotify are “honey & locusts,” “act your age” and “NO NEED.”

“There are some vocals on ‘act your age.’ I’m definitely interested to see what people think,” Rich said. “I’m excited to put out more stuff.”

The songs also are available on YouTube and Apple Music.

“We have some other things on there we couldn’t put on Spotify because it’s unofficial remixes,” Picard said.

Picard said they started working on the project in the fall 2020, but it started seriously in January.

Picard is an economics major and Rich is an informatics major. Both will graduate in May.

For the Spotify profile, visit open.spotify.com/artist/7ClPlZhvkoOQWUY0ADmvAI