By becoming an independent campus, Ivy Tech Hamilton County’s first challenge was finding a chancellor. It chose its leader in Stacy Atkinson.

Atkinson, a Westfield resident, has worked with Ivy Tech for more than six years. She started at the systems office, where she oversaw online courses. She then moved to the strategic initiatives department to create a strategic plan for the community college.

However, at the end of the strategic plan, Atkinson said her heart led her to campus work, so she became vice chancellor for academic affairs at the Richmond campus in December 2017.

“It was the strategic plan that really led me to that. At the systems office, the goal is the overall strategic plan, but being on a campus felt like you were actually doing something, and I could actually implement a strategic plan in Richmond,” said Atkinson, who started her new role at Ivy Tech Hamilton County March 1. “I helped write the strategic plan to give to 6,000 people, and I wanted to be part of it.”

In July 2019, Atkinson was promoted to chancellor of the Richmond campus. She and her family planned to move from Westfield to Richmond, but when the COVID-19 pandemic began, they never got the chance.
Then, opportunity knocked a bit closer to home.

“I had made the decision to commute, and then (Ivy Tech announced) the Hamilton County campus, which is just 16 minutes from my home,” Atkinson said.

However, she didn’t accept the chancellor position at Ivy Tech Hamilton County simply because it shortened her commute.

“My skills speak to a build-up and a startup and starting something new,” Atkinson said. “Ivy Tech hasn’t spun a campus out of a site, so this is a very unique opportunity, and the only reason they have done this is data shows the recruitable population is so large and the opportunity is so large in the area that it needs its own autonomous campus.”

“We will know what programs within our service area of Hamilton County will be the most productive of putting Hoosiers into the workforce and have those here instead of saying you can only take the basics here, but then we have to send you to the central Indiana campus,” Atkinson said.

Ivy Tech Hamilton County is still drafting which programs it plans to offer. Atkinson said data from across the county shows that Carmel is STEM-focused, Cicero is agricultural-focused and so forth.

“And then there’s health care,” Atkinson said. “Riverview (Health) is right down the block, so we can’t ignore that.”

Atkinson said an education degree will be offered because of a shortage of teachers in the state and nation.

“Hamilton County is very hungry for this is what I’ve learned in the last two months,” Atkinson. “It is very hungry for the opportunity to utilize this building and utilize Ivy Tech as the medium for skilling up their workforce. Hamilton County has so much opportunity, it’s hard to articulate it and put it into words. It’s the right thing to do. Ivy Tech having a sole, autonomous, dedicated campus here is the right thing to do.”

Another area Atkinson is excited about is the ability to partner with local high schools.

“We want to make sure those students are ready – the students without a plan or students that have a plan that doesn’t work out because life gets in the way, that we can become their first option, that Ivy Tech can become the first choice instead of the last choice,” Atkinson said. 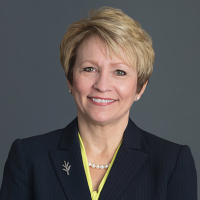 “I hope by the summer we are offering classes for students they can start and end here,” Atkinson said. “I am super excited about the external partnership here. There’s a great opportunity to build and strengthen external partnerships. There’s an opportunity for the leadership team to go out, be subject matter experts in their jobs and make things happen for this campus.”

“Dr. Atkinson brings the skill of an experienced chancellor, as well as an energy, innovative spirit, and leadership to establish the academic and workforce programs which will meet the needs of Hamilton County students, employers, and communities,” Ivy Tech President Sue Ellspermann stated. “Further, Dr. Atkinson will engage as a CEO and academic leader to ensure speed and agility in all of our partnerships and endeavors.”
For more, visit ivytech.edu/noblesville/. 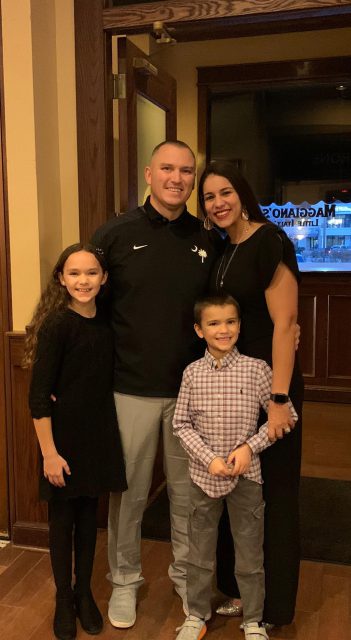 Stacy Atkinson with her husband Keith, and their children, Kelsey and Jordan. (Submitted photo)

Family: Husband, Keith, is an air traffic controller at Grissom Air Force Base; daughter Kelsey, 11, is a student at Westfield Intermediate School; son Jordan, 7, is a student at Maple Glen Elementary School.

Hobbies: Kelsey is into competitive gymnastics and Jordan is into coding. As a family, the Atkinsons like to travel: “My parents retired to Puerto Rico, and our children love to cruise,” Atkinson said.

Keith enjoys cooking, and the Atkinsons like to watch IU basketball.

Prior to living in Westfield: Atkinson was program chair for the Early Care and Education program at the Technical College of the Lowcountry in South Carolina, after being honorably discharged from the U.S. Marine Corps. During her time in the Marines, she was an avionics technician and worked on F/A 18A fighter jets during Operation Iraqi Freedom and Enduring Freedom. Between the Marine Corps and moving to higher education, she spent time in an elementary school classroom, where she was a second-grade teacher at Shell Point Elementary in Beaufort, S.C.

Outside of work: Atkinson serves on the National Association for the Education of Young Children (NAEYC) Commission on Accreditation of Higher Education programs. As a native Spanish speaker and English language learner, her passion for children and their literacy is an important component of her work with AMIGOS Latino Centers, PHASE Foundation and Girls, Inc. Additional boards she serves on include the Wayne County Chamber of Commerce and the Reid Health Community Benefit Council.