After retiring as a Westfield Middle School English teacher in 2019, Joe Stemnock decided to make his own kind of music.

Stemnock, who records all his music under his nickname of Stemmy, had been playing in bands since he was 21. 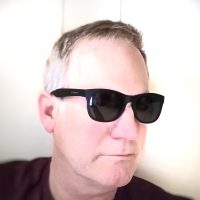 “I play a variety of genres, including rock, funk and electronic, plus instrumental music,” said Stemnock, a 59-year-old Carmel resident. “When I retired, I decided I had the time, so I might as well try to write original music, which is something I always wanted to attempt. I started writing in the summer of 2020 and soon became interested in recording. Due to the advancement of recording technology, you can make relatively high-quality music with a laptop. I have released around 60 songs, but like most songwriters, have thrown out an equal number.”

Stemnock’s songs are all solo works.

“I use a distribution company that takes care of distributing my music on most streaming platforms,” he said. “I don’t do albums because I think they are becoming obsolete. Everything I do is a single, around 60 songs or so. I do not have a website because people can access my music easily via streaming platforms.”

Stemnock, who taught for 35 years mostly in Westfield and has lived in Carmel for 23 years, writes, produces and plays all instruments on the recordings, including vocals.”

“The process of recording is time consuming since I play all parts by myself, which requires laying down, mixing and mastering numerous tracks into one song,” he said. “I enjoy being in control of the recording process, and after playing in groups (I) enjoy the solo aspect. I do not have an interest in playing live anymore. I generally write and record every day.”

Stemrock, who grew up in Indianapolis, started playing guitar when he was 13. He was mainly influenced by his brother, Steve, who is a musician, too.