You are at:Home»Current in Westfield»Westfield Cover Stories»No one dies alone: Westfield man receives volunteer of the year award for hospice work

Michael Judge’s voice is the last some hospice patients hear before they die.

The Westfield resident, who was recently named Flanner Buchanan’s Hospice Volunteer of the Year, has volunteered with the No One Dies Alone hospice program since 2016. He said participating in the program changed him as a person, although he was initially uneasy about sitting at someone’s bedside as they neared death.

“Back around 2016, I was looking for volunteer opportunities of some kind. I’ve always enjoyed that, and it had been a long time since I had a chance to do volunteer work,” Judge said. “I kept coming across this series of distressed messages from a hospice board saying, ‘We desperately need volunteers,’ and I kept skipping past it. It didn’t seem like something I was interested in.”

But shortly after, a message popped up with the headline “No one should die alone.”

“And for some reason, that just stopped me in my tracks,” Judge said.

Judge called the hospice group and learned it was seeking volunteers to lead vigils, in which a trained volunteer sits at the bedside of a hospice patient in their final hours if they have no family or if their family is unavailable. The group’s greatest need was a three-hour vigil from 11 p.m. to 2 a.m. Judge volunteered for that vigil.

“I would get off work, take a nap and at about 11 o’clock at night, go to whatever medical facility it was and sit at their bedside,” Judge said. “They are mostly unconscious and often restless, so I would hold their hand, or if their mouth looked dry, I would give them water. If they were agitated, I might read to them or sing a hymn here and there, but just holding someone’s hand would calm them often.”

Judge served two years on the “No One Dies Alone” team, and as a result, he said he’s not the same person.

“Even if someone is unconscious, the medical community believes the last thing to go is the ability to hear, so I would introduce myself and speak to them as if they were awake,” Judge said. “I would be all teary eyed even with people I don’t even know. Sitting with somebody and being trusted with them in their last days and hours … this is someone whose life is wrapping up.”

Judge said during the two years he volunteered for the 11 p.m. to 2 a.m. vigil, two hospice patients died while he was with them.

“I remember the first one I wept for a week like it was a long, lost relative,” he said. “When you hold someone’s hand when they take their last breath, especially someone you don’t know, it was life-changing for me. It taught me to grow up and mature and love better.”

After two years of serving with the No One Dies Alone program, Judge assisted Indianapolis-based Heartland Hospice with developing a local version of We Honor Veterans, a national program conducting ceremonies to recognize veterans in hospice care. Judge is a retired U.S. Marine Corps. master sergeant.

“I stepped over and helped develop that and have transitioned to that now for the last two years going forward,” Judge said. “The bulk of what I do is, we’ll set up appointments with veterans in hospice in different stages. Most are conscious and (we) hear their story.” 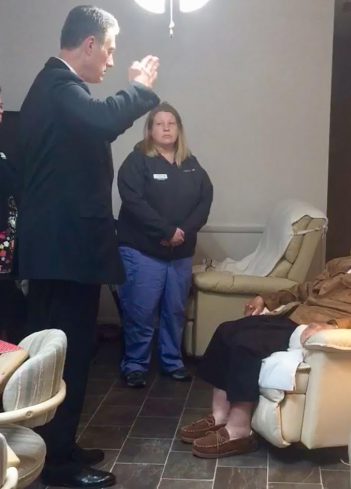 Judge said he dresses in a suit and tie instead of a military uniform because he wants the visit to be about the veteran in hospice care and their service.

“I ask if there’s anything in your (service) history you remember that’s meaningful to you and relationships, and sometimes they do, sometimes they don’t. Usually, they talk about relationships meaningful to them,” Judge said. “I share with them less than 1 percent of the U.S. population ever served in the Armed Forces and thank them on behalf of the U.S. and Heartland Hospice that they either volunteered or were drafted but didn’t run away. They went and served their country.”

At the end of the presentation, Judge leaves a gift with the veteran.

“Then, I come to the position of attention and give them their final salute,” Judge said. “It’s kind of like their last Veterans Day. I think of it as a final formation. I’ll tell you, it’s pretty emotional.”

Judge said helping veterans tell their story is healing for the veterans and their families. He said the organization makes sure as many loved ones are present for the ceremony as possible.

Judge travels within a two-hour radius of his home to perform the ceremonies. He received Flanner Buchanan’s Volunteer of the Month award in December 2020. He then learned that he would receive the company’s Volunteer of the Year award as well.

Judge lives in Westfield with his wife, Marianne. They are empty nesters and enjoy spending time with their grandchildren. Outside of working as a customer experience specialist and volunteering with Heartland Hospice, Judge enjoys reading Sherlock Holmes. 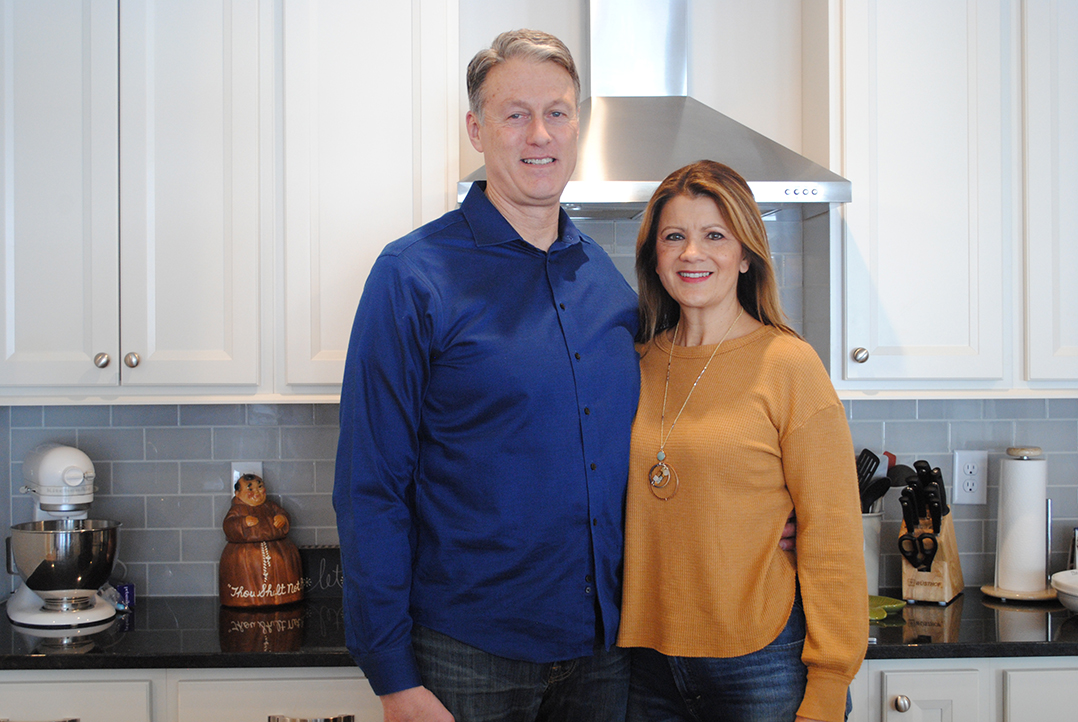 Michael Judge with his wife Marianne in their Westfield home. (Photo by Anna Skinner)

Westfield resident Michael Judge said one of the most impactful memories of serving with the local We Honor Veterans program occurred early in his service.

“There was a young veteran in hospice. It wasn’t combat-related, but he was about 30 and bedridden from a debilitating disease taking his life,” Judge said. “When I came in to present and share and thank him for his service, at the end of it, he starts moving around in bed and the nurses are concerned, and he gets up out of bed, which he hadn’t done yet for a while, and he stands up on very painful legs. I was going to give him that final salute, and when he saw what was coming, he wouldn’t do it laying down. He had to standup to return that. After we saluted each other, he asked me to turn and face a banner on the wall that had the names of several of his military comrades killed in a combat operation over in Afghanistan, so we did.

“We faced it and saluted his comrades together, then he struggled back to bed, and I got out of there before he saw me bawling.”