You are at:Home»Current in Carmel»Carmel Community»First-run electric Mustang SUV lands in Carmel

Ben Weir had never thought of buying an electric car.

“I just wasn’t with the craze,” he said. “But I’ve always been a huge Ford fan, specifically Mustang. So, when they decided to build this electric car and use the Mustang heritage, I became interested. I started reading more about it.” 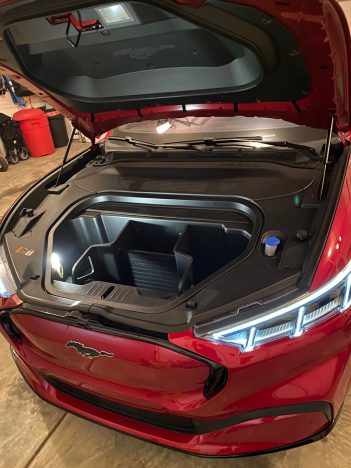 The First Edition sold out several months ago with pre-orders.

“I was still a little skeptical before I went to get it, but since having it, I absolutely love it,” said Weir, who worked at Pearson Ford before joining Current Publishing in 2020. “The technology is amazing in it. The pickup is better than I thought it would be. It’s a fast car.”

Weir said he charges the car each night.

The total radius is approximately 200 miles on a full charge on a standard battery, Weir said.

He has purchased a wall-mounted charger that is much stronger.

“It’s sporty in the sense that it’s a Mustang. It’s a fast electric car but it’s still considered an SUV,” Weir said. “It’s the first-ever Mustang SUV, so it allowed me to carry my daughter’s sports equipment. It’s an all-wheel drive, so you get the real combination of sportiness, speed as well as family car.”

Weir said it’s a stylish, fast option for the electric SUV market that doesn’t cost $100,000 like some Tesla models. A Mustang Mach-E GT model will come out later this year, which will cost approximately $61,000. Weir said he sees a lot of heads turn because they see the Mustang on the front, but then realize it’s an SUV.

Weir, who also owns a 2006 Mustang GT convertible, said there is a rear cargo area and storage under the front hood.

Mattingly said there is a lot of interest in the vehicles. In the first week, there were 25 to 30 test drives of the Mustang Mach-E, he said, including some reservation holders who haven’t yet received their car.

“We have some reservation holders who are waiting for GT or a different model,” Mattingly said. “There is a ton of excitement in it.”

Mattingly said Ford is planning a production run of 50,000 for Mach-E for the year.