You are at:Home»Current in Carmel»Carmel Community»Characters of Carmel: Meet Farwa Hoffman 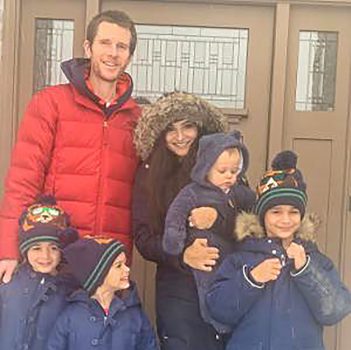 Scott and Farwa Hoffman met in 2008 while attending the College of Podiatric Medicine and Surgery at Des Moines University, and they are now both foot and ankle surgeons practicing in Carmel. Scott is originally from Peoria, Ill., and Farwa is originally from Indianapolis. They were married in 2010 in Carmel and now have four sons.

During the pandemic, the family has enjoyed going on nature walks and exploring their backyard for earthworms. The boys are best friends who love to play with dinosaurs, build snowmen and conduct science experiments. They also love drawing on the sidewalk and driveway with chalk. The Hoffman brothers love playing soccer for the Carmel Dads’ Club, and Farwa has been an assistant coach a few times for their team.

Children: Zeeshan, Zayn, Zidan and Zaakir (all born within 5 1/2 years)

Nickname for the boys: The bears

Interesting fact: All four babies were born at Ascension St. Vincent Carmel hospital, and the first three were delivered in the exact same room.

Best bedtime stories: “Pete the Cat,” “Curious George,” “The Mouse and the Motorcycle” and anything about dinosaurs.

Most popular game: Playing veterinarian to their many stuffed animals.

Do you know an interesting character who lives, works or worships in Carmel? Send suggestions to sgattlieb.currentincarmel@gmail.com.