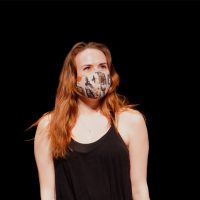 “I love being able to show my versatility when playing two different roles, especially at Civic,” said Masterson, who plays Jane Bennet and Miss De Bourgh. “Being in ‘Much Ado About Nothing’ (in February 2020) and “Pride & Prejudice,” I have found a lot of similarities between Hero and Jane. They are two women who fall in love at first sight and receive proposals. They each have their own unique personalities, but the similarities are uncanny, so when the opportunity arises to play another character who is the polar opposite, I am so excited.

“Miss De Bourgh is the absolute furthest away you could get from Jane, and although she’s on stage for only a couple of scenes, they are the most fun.”

The production is Masterson’s second appearance in “Pride & Prejudice,” having performed in at Ball State University.

“While my best friend was cast as Jane, I was cast as her nemesis Caroline Bingley, another polar opposite of Jane,” the Carmel High School graduate said. “Caroline was snarky and crude, but Jane is kind, sweet and a great person to be around. Funny enough, Emily Rogge Tzucker, Civic’s director of ‘Pride & Prejudice,’ was the dialect and movement coach for that production. That was the first time we had ever worked together, and I am so glad I get to work with her again.”

Tzucker also directed “Much Ado About Nothing” for Civic last year.

“It was so nice to be in rehearsal with her again,” Masterson said of Tzucker. “She was my professor at Ball State, and it was so nice to be around someone who taught me so much. During my junior year, Emily’s class was the one where I finally gained confidence in my acting abilities. She is a wonderful role model, and if she directs another show at Civic, you better believe I’m going to be in that audition room.”

“Lizzy has been a dream and honor to bring to life,” Tiller said. “She beats to her own drum, despite what society expects and I really admire that.”

This is Tiller’s first time working on “Pride & Prejudice.”

“I love Kate Hamill’s adaptations of dramatic works and Emily Tzucker’s direction,” Tiller said. “I think our audiences will be surprised and tickled by this take on ‘Pride & Prejudice.’”

Tiller, a 2016 Zionsville Community High School graduate, said she began her love for Civic Theatre through the Junior Civic Program and Act One in the fifth grade when Civic was located at Marian University. She then moved on to the Young Artists Program through high school.

“During that time, I performed in over seven productions. ‘Pride & Prejudice’ marks my eighth show on the Civic stage, and I couldn’t be more excited,” she said. “I have been performing for as long as I can remember. I started out taking dance lessons at The Village Dance Studio, and the rest is history. I just recently graduated from Ball State University in the BFA Musical Theatre class of 2020. I don’t plan on stopping anytime soon.”

Like the cast, Carmel resident Tzucker is glad to have a show despite having to wear face masks and practicing social distancing.

“The challenges in no way match our excitement to bring our community a piece of theater during this unprecedented time,” she said. “We have worked hard to create a safe space for our actors and artists that will allow our (virtual) audience to feel like they are in the theater. The cast is a fantastic group.”