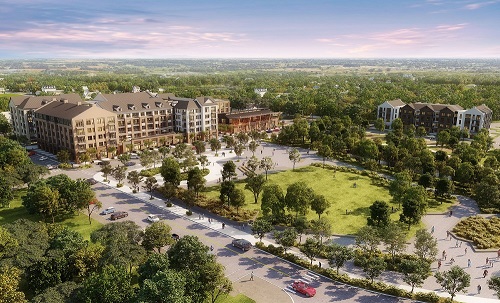 A rendering of the expansion to the Union Square at Grand Junction project in downtown Westfield. (Submitted rendering)

On Feb. 4, The City of Westfield and Old Town Companies announced a joint residential and commercial development that expands on the Union Square at Grand Junction project.

The expansion will include a 300-plus spot parking garage in the Union Square mixed-used development, a much-anticipated amenity as there are currently no parking garages and limited public parking in downtown Westfield. The expansion also includes a new townhome development called Midland South, which is proposed along the Midland Trail across from the Grand Junction Plaza.

“Families and businesses want to be in Westfield,” Westfield Mayor Andy Cook stated. “We have worked with residents for years to create the vision for the heart of our city. Now it is coming to life. I am happy to have Old Town join us in this journey.”

“The natural beauty of the Midland Trail adjacent to our proposed townhome community is an added benefit,” Moffett said.

Pending approval by the Economic Development Commission, the Redevelopment Commission and the city council, the City of Westfield will enter into a public-private partnership with Old Town Companies to build the parking garage. If approved, the city plans to use tax increment financing to pay for its portion of the garage, estimated to be at $10 million.

Union Square sits on the north end of Westfield’s Grand Junction Plaza. Construction on the plaza began in the summer of 2020 and is expected to be complete later this year. The plaza project has been in development for more than 10 years and features a 6-acre park with a greenspace, trails, an amphitheater and ice-skating rink.