It’s been nearly 1,000 days since Patrick Murray began praying the rosary daily, a practice he intends to keep for the rest of his life.

A retired professional hockey player, Murray renewed his commitment to his lifelong Catholic faith when he finally discovered why, at not quite 50 years old, he began having trouble with some of the simplest tasks, such as walking up the stairs.

It wasn’t good news for Murray, who was pained to realize his days of playing recreational sports and coaching his sons on the ice were behind him. But his daily prayer routine helps him count his blessings and gives him strength to keep the disease at bay until a treatment is developed.

“It puts things into perspective, because for as bad as this disease is, I won the lottery when it comes to my wife and my kids and my friends,” he said. “I’m surrounded by incredible people who really care and try to help me as much as they can. It would be tough to go through this without them.” 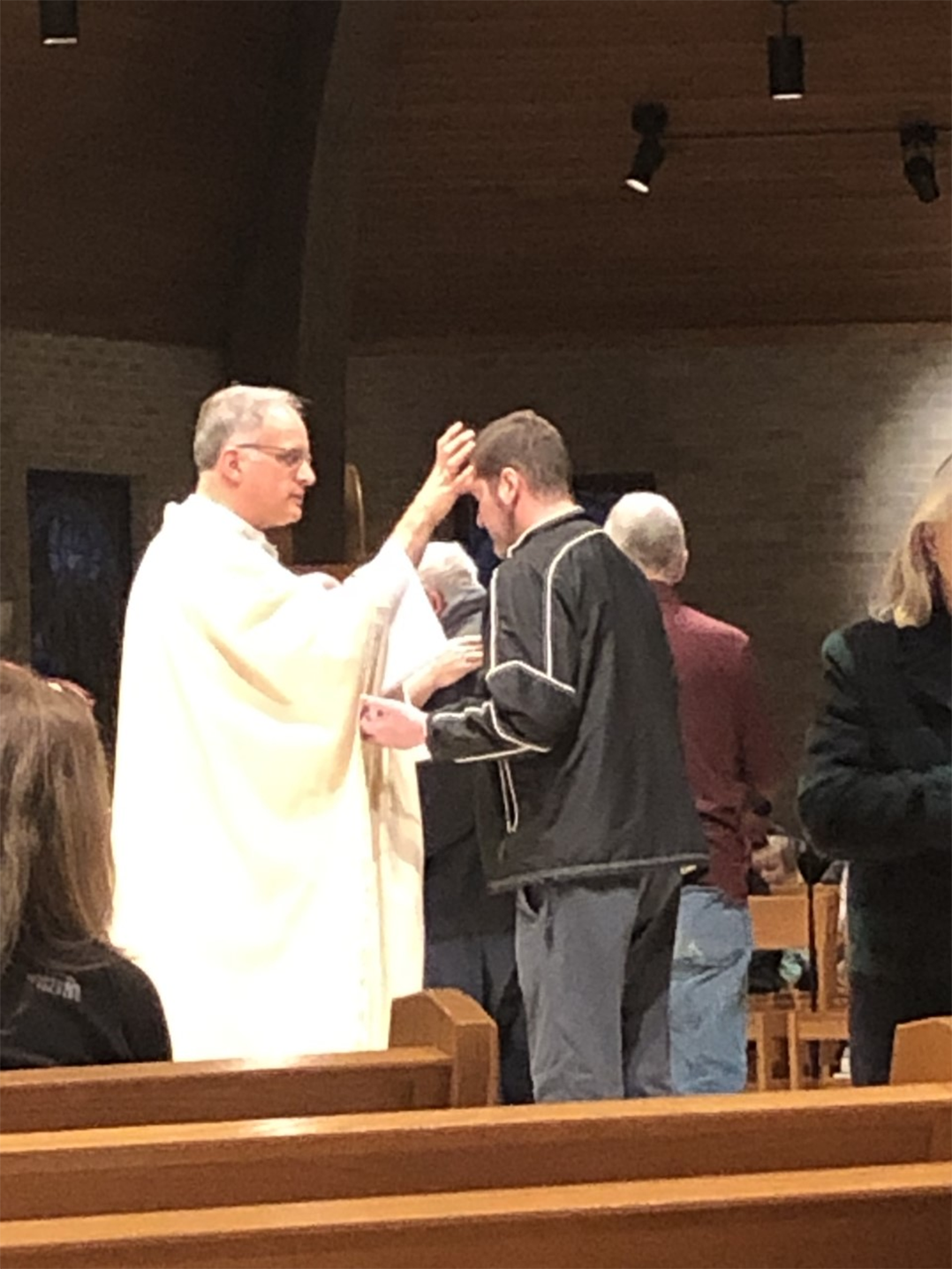 Murray, now 51, grew up in a small farming community in Ontario and moved to the U.S. to play hockey at Michigan State University, where he met his wife, Kim.

The Philadelphia Flyers selected him as the 35th pick in the 1988 NHL Entry Draft, and he spent eight years playing professional hockey for the Flyers and teams in other leagues, including in Germany.

“That was a dream come true for a Canadian boy,” Murray said.

Murray retired from pro hockey in 1998 and moved to Carmel two years later to be near Kim’s parents as they raised their family, which grew to include six children. Murray became a financial advisor at Westpoint Financial Group in Carmel, where he still works on a part-time basis.

It was three years ago that Murray first noticed something wasn’t right.

“I was having trouble skating. I thought I was just getting older, but it was becoming difficult to do basic daily tasks,” he said. “I started on this path of trying to discover what is wrong.”

It took a year of visits to various doctors and a lot of online research before he got a correct diagnosis. That’s not unusual for patients with IBM, according to Dr. Chris Weihl, a professor of neurology at Washington University School of Medicine in St. Louis, who diagnosed Murray with IBM.

“Often (a pattern of weakness) is dismissed as someone who’s out of shape or lazy, so often there is a delay in diagnosis because the patient thinks, ‘I just need to exercise more,’” said Weihl, one of only a handful of doctors in the U.S. who specializes in IBM.

Weihl said Murray is one of his younger patients, as the disease — which has no known risk factors — most often begins to affect people in their 60s, such as rock musician Peter Frampton, 70, who was diagnosed with IBM in 2015.

“It starts to rob them of their independence in the time of their life when they really deserve to be able to go out golfing, to travel and be able to care for their grandkids,” Weihl said. “While people can live with it and have a meaningful life, it really causes a morbidity at a time of life when they are wanting to start living more freely.” 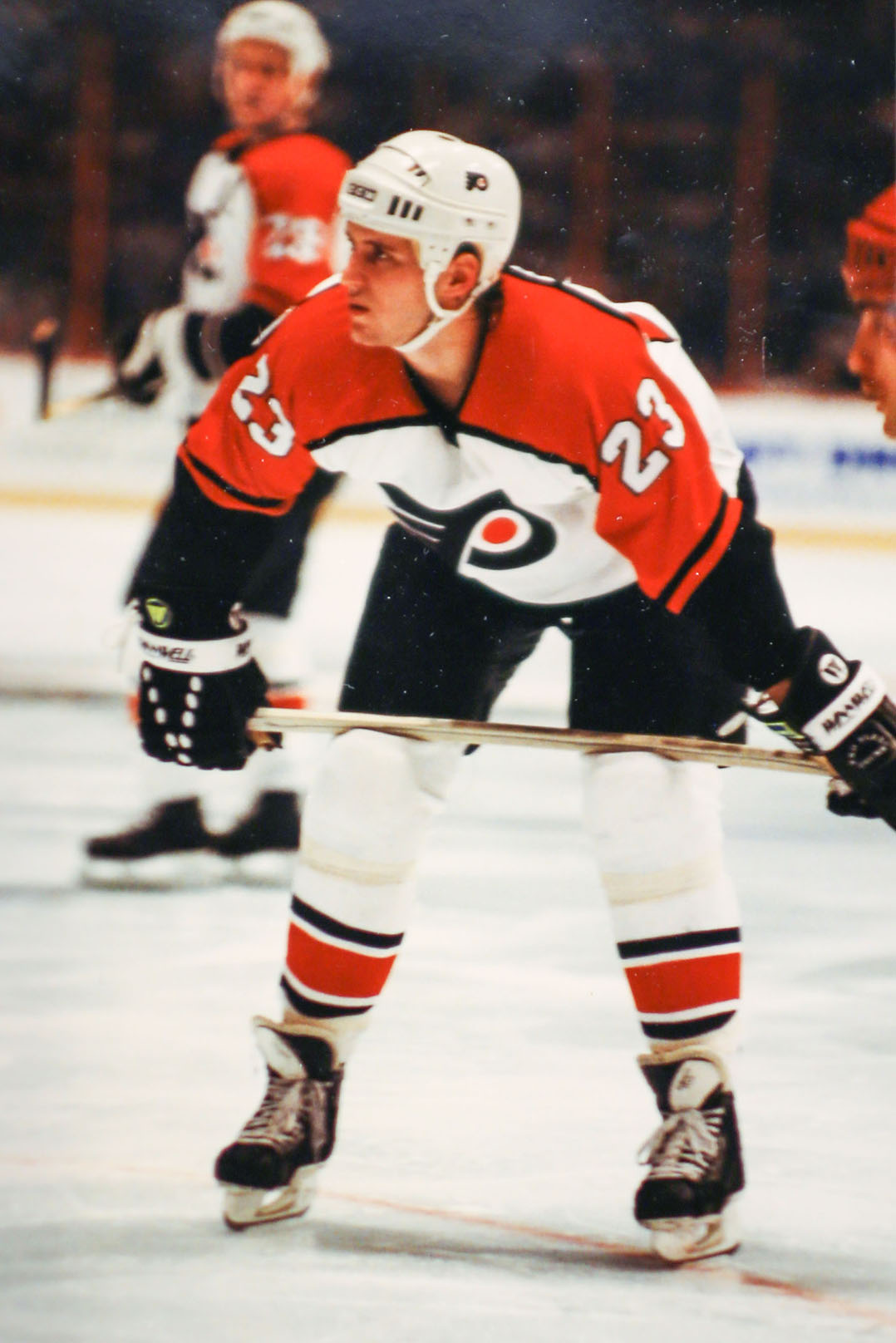 Patrick Murray plays in a game for the Philadelphia Flyers in the early 1990s. (Submitted photos)

‘At least some hope’

The good news for Murray and others with IBM is that several treatments are in clinical trials. More research than ever before is being done on the disease, and Weihl believes remedies will be available in the coming years.

Until then, he urges his patients, whose lifespans are not typically affected by the disease, to do everything they can to slow the progression of IBM by exercising to keep their muscles as strong as possible and avoiding falls and situations that could lead to injuries.

Murray is doing all of that and more. He monitors his diet and is trying blood-flow restriction exercises, which uses bands on his arms and legs like small tourniquets to promote the release of hormones that could help slow muscle degeneration. And, of course, he’s turned to his faith.

“(IBM) makes things challenging, for sure, but I think with the routine I’ve created I’ve slowed the process,” he said. “I haven’t cured it, but I feel like there’s at least some hope.”

Myositis, a chronic inflammation of the muscles, comes in many forms.