You are at:Home»Lifestyle»55 and Better»May’s World War II knowledge grows with master’s degree

Ron May already had a vast knowledge of World War II history.

The Carmel resident took another step with an academic pursuit.

May, who has served as chaplain at Hoosier Village in Zionsville since 2015, earned his master’s degree in a World War II Studies Program Dec. 14, 2020 at Arizona State University.

The program exclusively focused on World War II and is the first of its kind in the world.

“The thing it did most for me was increase my understanding of the global aspect of World War II and its implications,” he said. “It was very intentional to build a global look at World War II instead of just the traditional view from the Western or American viewpoint of the war.”

The online program began in January 2019 and came into existence through a collaborative partnership between Arizona State University and the National World War II Museum in New Orleans.

May, 57, was one of 42 students in the first cohort to graduate from the program. The two-year degree program consisted of 10 courses (30 credit hours) that reviewed the global impact of World War II and taught students the skill of critical analysis in researching and writing about the war.

May said he had to thank BHI Senior Living’s BHI Foundation, which assisted him with a scholarship for the master’s program. BHI operates Hoosier Village.

“They take four of your papers from four classes and you rework, refine and elaborate further,” May said. “There was one paper, one audio podcast and one video lecture and one museum exhibit.”

“A little bit was how things set up for the Korean War and Vietnam War and the Cold War,” May said. “The courses were all quite good, but the one I enjoyed the most was the class focusing on oral history interviews and aspects of memories.”

May also is the author of two books on World War II veteran stories, “Our Service Our Stories” volumes 1 and 2. May, who uses his full name of Ronald P. May as author, is working on a third book, which he expects will be released in late spring.

“That kind of got delayed when I started working on the master’s program because of time,” he said. “I’m 65 percent done with my third book and have really already started a fourth book with interviews and materials gathering. It’s going to be about those who worked in the medical field.” 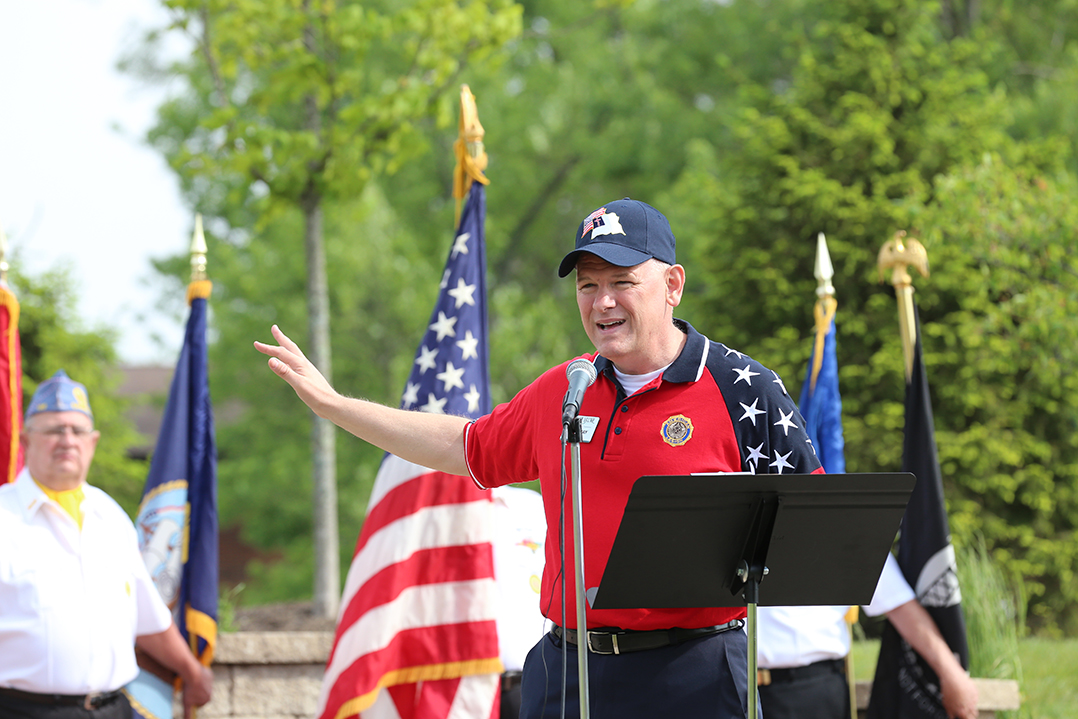 “So, I have some new material there, but what I’ve been doing looking ahead to the future is trying to collect memoirs or oral interviews from those that have passed away,” May said. “Actually, two residents have supplied their father’s memoirs, and another (shared) all of the letters that were shared during the three years he was in the war. I’m building the stories from their memoirs and the letters.”

May, a chaplain in the U.S. Naval Reserve for 22 years, also has acted in recent years, presenting a one-man show on Ernie Pyle. He also acted in Carmel Community Players’ “Failure to Zig Zag” about the trial of Capt. Charles McVay following the sinking of the USS Indianapolis. May was set to appear in Civic Theatre’s “A Few Good Men” in March 2020, but it was postponed by the COVID-19 pandemic a few hours before the official opening night. It has been tentatively rescheduled for May 7-22.