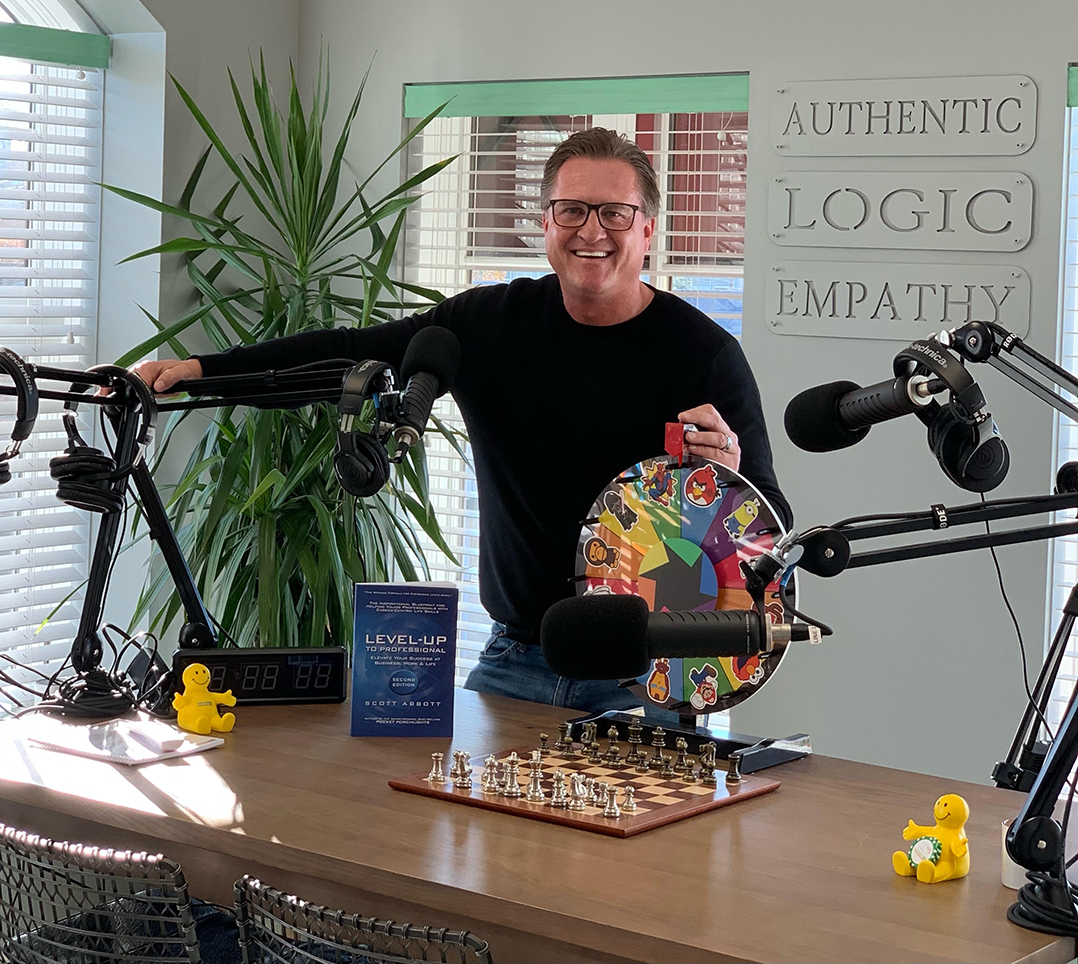 Carmel resident Scott Abbott pauses in the studio where he records the “Moments to Momentum” podcast. (Submitted photo)

Scott Abbott has heard his “Moments to Momentum” podcast compared to that famous line from “Forrest Gump.”

“It’s like a box of chocolates. You never know what you are going to get,” Abbott said.

It certainly has been a sweet endeavor for the Carmel resident.

“Our focus has been everybody from CEOs and investors to doctors, artists and spiritual folks,” Abbott said. “It’s really focused on an eclectic group from all vocations and walks of life. We’ve had a great mix of guests, and it’s just going to get better. 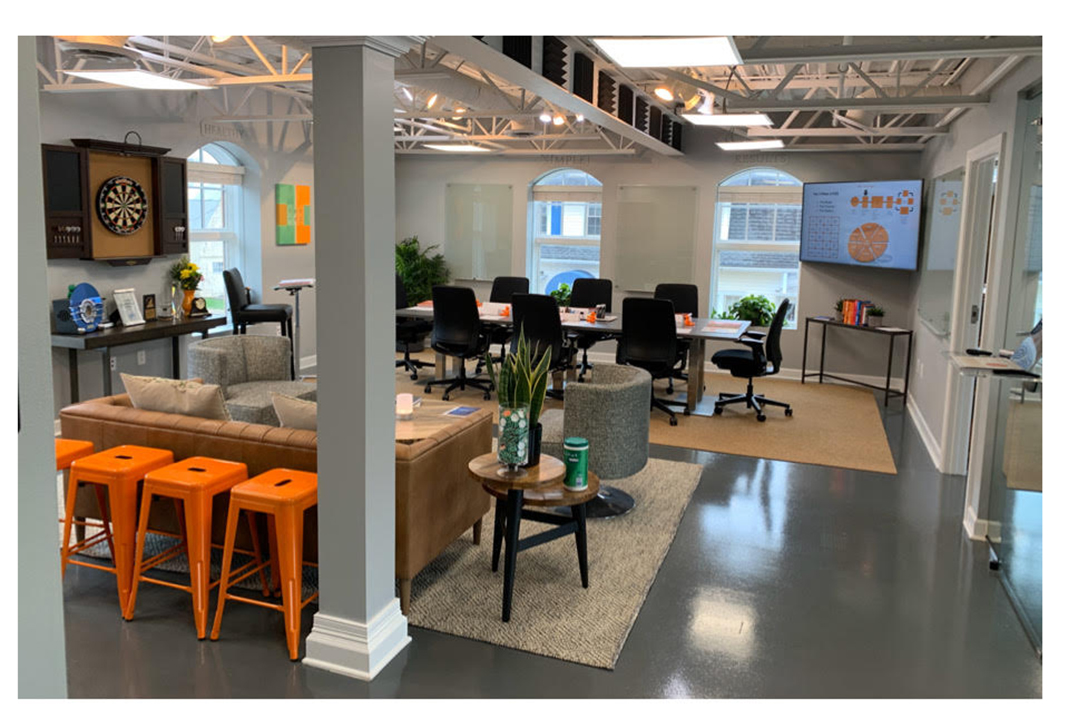 Abbott, 54, an investor and coach who owns three companies, has been doing the show for four months with a new episode each week. The podcasts are recorded live and aren’t edited, running from 60 to 75 minutes, from his Traction Optimization Studio in his Carmel office.

Abbott was preparing to write his fourth book and called it “Moments to Momentum” when he switched gears and decided to do a podcast of the same name first. He had been thinking about doing a podcast for more than a decade.

“With COVID and a little more time on my hands, I decided rather than have a book written by me, I thought, ‘Why don’t we have guests and make it more of a conversation?’” he said.  “I’m still going to write the book, but what I’m basically going to do is ask my guests to write two or three pages themselves, so it’s going to be a book of other people’s moments to momentum and their advice.”

Abbott wasn’t sure what career he wanted to pursue in college, earning a degree in journalism and communications. After graduating, he was offered an opportunity to work for a software technology company and took it.

“As the cliche goes, if you want to make God laugh, tell him your plans,” he said. “The good news is I had no plans. I was made an offer to work for a tech company right out of college, and the majority of my professional life has been in and around technology companies, big ones like IBM, Microsoft and Oracle. I also started a handful of technology companies myself.” 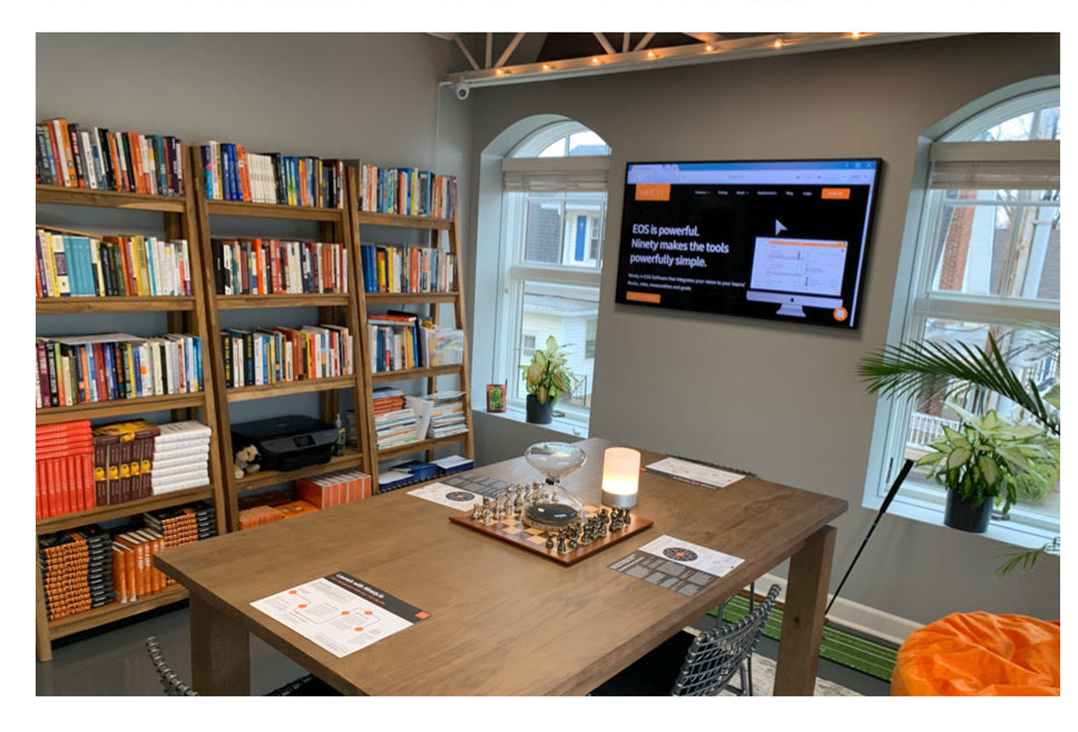 So, he reasons the podcast is close to a career he thought he might pursue: broadcasting.

“I joked to my dad that he’s finally getting his money back in terms of the college (degree) he paid for,” Abbott said.

Abbott started at the University of Minnesota and finished at DePaul University. Born in Fort Wayne, Abbott’s father, Larry Abbott, was an engineer for International Harvester. Growing up, Abbott spent seven years in London, a year in France and his last three years of high school in Madrid, Spain.

“All of our (podcast) guests are from central Indiana,” he said. “Next year, we’re going to invite guests from around the country, but because of the investment I made in the studio and to give a shot in the arm to the Indianapolis area, we’ve focused on folks who we can interview in studio.”

Abbott and his wife, Shari, have two children, Ethan and Helena. They are Carmel High School graduates and attend Indiana University.

The podcast is available on iTunes and Spotify. For more, visit momentstomomentum.com.

Podcast host Scott Abbott said “Moments to Momentum” starts with general introduction questions about school, family and pets. He then follows with a game called “five in 10,” where the guest spins a wheel to answer rapid-fire questions in 10 minutes.

“The wheel lands on one of 12 spots, then we have a slew of questions,” he said. “It’s to get to know them better and get them to relax and have some fun.”

Abbott has suggested a home and office version of the game can be used when family and friends visit by downloading the questions from his website, thus avoiding political discussions.

The third part of the podcast covers impact on the person’s life.

“I do encourage transparency, honesty, and it’s a great way to learn, especially with some high-achieving people, CEOs, people that have fortunate experiences,” he said. “Then we have a nice little give and take. My whole idea is, I coach and invest with high-performing leaders all over the world.”

So, he wanted to share some of that wisdom and advice with listeners.

Carmel resident Terry Anker, president and CEO of The Anker Consulting Group, has been a guest.

“He tries to make it fairly entertaining,” Anker said. “He mixes in both questions that are probing and insightful and things that are fun. It helps you better understand where someone is coming from and draw better commonality with the individuals that you might not think you have anything in common with. When you get someone relaxed and ask him a question that is probing, you can get a better answer out of people. That is what I found from listening to the podcasts.

“Even the people I knew pretty well, I discovered I learned some things about them.”