Joel Kirk founded Discovering Broadway in 2019 with a mission of giving play producers an opportunity to introduce their material in Carmel and Indianapolis.

Kirk, a 2012 Carmel High School graduate and New York theater director and producer, envisions the process could happen in the form of readings and workshops, culminating in a pre-Broadway performance at the Palladium at the Center for the Performing Arts in Carmel. 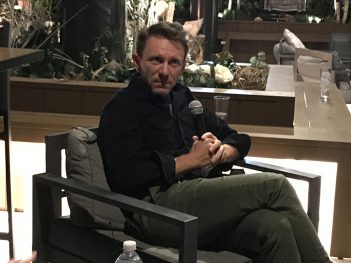 Another of the organization’s mission is education, so Kirk brought Kris Kukul in for a visit. Kukul is the music director, orchestrator, arranger and music supervisor for “Beetlejuice The Musical.” He also wrote the incidental music for it. The musical was running when Broadway shut down in March.

Kukul held an Audition Master Class at Grace Church Nov. 2. He then met with Discovering Broadway supporters that night for a chat at 3UP Rooftop Lounge in Carmel.

“I think it’s important for Hoosiers to remember that the Broadway community is excited about coming here, whether that’s three months, six months or nine months,” Kirk said. “There is a hunger to do theater and have it start in Indiana. Kris is from (Ohio) and now he’s a music director on Broadway, so he knows great art and great artists start in the Midwest. Coming here and telling people firsthand was meaningful for us and I hope it was meaningful for him.”

Kukul worked on “Beetlejuice” for a few years before it landed on Broadway in April 2019.

Kukul shared the journey “Beetlejuice” took to Broadway with Discovering Broadway supporters. He said the show did four large-scale labs, staging part of the show and sets with band and choreography.

“There were two or three readings, and we were rewriting through the whole process,” he said. “Actors Union allows you to do these readings that are 29 hours. In that time, you have to teach everybody all of the music, all of the words. Two of the hours are the presentation. It’s a very tight window of time and it’s really stressful. This was a new musical. No one had touched a word of it. We had a cast of 30 people and a band. We plowed through the first and the second day and Wednesday morning, then that afternoon we started reading the show from the top. We got to dinnertime (and) we weren’t near the end, so we were at a good 4 1/2-hour musical at that point.

“So, we had to go home that night and cut half of the show just to get something to present. We were up very late.”

The next day, they delivered a new script to the actors.

“Then we had a new version and Friday we presented it to all these scary Broadway producers,” Kukul said.

“The original idea was it’s going to be for adults and the humor was for adults,” Kukul said. “It was not kid-friendly. It was a lot racier and jokes were dirtier. From the first show, we realized the theater is full of kids, so some people were upset. We were ripped to shreds.

“For broadening the appeal of the show, we had to tone it down. We got specific notes from Warner Brothers what had to be taken out of the show.”