You are at:Home»Current in Carmel»Carmel Community»Carmel street commissioner retires after 32 years with department

Dave Huffman now has more time for his woodworking hobby and spending time with his grandchildren.

Huffman, 60, retired Oct. 30 after more than 32 years with the City of Carmel Street Dept. After joining the department in April 1988, Huffman became interim street commissioner in 2007 and was appointed officially in December of that same year. 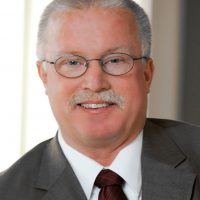 “It’s just the right time. I’ve been there long enough,” said Huffman, who lives in Noblesville with his wife, Karen. “I was going to retire earlier this year, but when COVID hit I postponed it. Now that we have everything in place, I felt it was more appropriate now than earlier. I’ve got one grandson that is four months old and another grandchild due in December, so I’m looking forward to spending time with them.”

Operations Manager Terry Killen, who has been with the department since 1991, will replace Huffman as commissioner. Huffman said Killen has been his right-hand man and it will be a smooth transition.

The department experienced tremendous growth during Hufman’s time there.

When Huffman became commissioner in 2007, his department managed 406 miles of streets and 47 roundabouts compared to today’s 544 miles and 134 roundabouts.

“The two things I’m very proud of (are), the work we’ve done in getting the snow removal quicker and more efficiently without adding a lot of people,” Huffman said. “We updated the equipment and we added wing plows on some of our salt trucks and wing plows on smaller trucks. Now we need fewer people to do the same amount of work. When I first started, we used to do a city plow in 15 hours, and now our best effort has been four. We’ve knocked the time down, so it’s a cost savings to the city, a time saver on the equipment and the people. (I’m also proud of) getting all the streetlights changed over to LED lights, which cuts 48 percent off the electricity consumption on the streetlights.”

LED lights installation started in 2009 with funds from an American Recovery and Reinvestment Act grant. Huffman said there was $600,000 in grant money to use.

“It’s been a great experience getting to know several people,” said Huffman, who had a banking career before going to work for the street department. “Some I deal with regularly and some not so, but I love meeting the people.”

Carmel Mayor Jim Brainard praised Huffman and his department for the services they provide for the city and the manner in which they carry out their many duties.

“From midnight calls on snowy winter nights to going out during a storm to remove downed trees or debris blocking our storm sewers during a heavy rain, Dave and his staff have risen to the challenge of keeping our streets and our city in optimal condition and, as a result, keeping our residents and visiting drivers safe,” Brainard stated.