You are at:Home»Current in Westfield»Westfield Community»Westfield man writes 1st novel on mystery at Oktoberfest 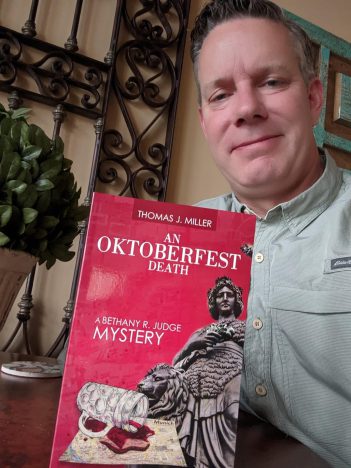 Something was brewing in Thomas J. Miller’s mind when he found a way to mix his expertise.

The Westfield resident is an experienced writer in the beer and wine industry and is a home brewer.

“I did a lot of freelance writing for the beer and wine industries from the 1990s through 2005,” Miller said. “At which time, I had to focus on family and career issues. I got away from magazine and newspaper writing. I had a series in mind, and it has been germinating over the last bunch of years.”

“I wrote the first draft and finished a couple of years ago,” Miller said. “I was sitting on it with no idea of how I was going to bring it to a conclusion and publish it. Through my wife’s friend, I got an opportunity to pursue with this publisher, iUniverse, in Bloomington.”

Miller went through a serious editing procedure with the publisher and the book was released Oct. 1. The main character is Bethany R. Judge.

“This one starts out in Oktoberfest in Munich,” Miller said. “Each title will reference a beer style. Subsequent books in the series will have beer style in the title. The goal is tie in the growing passion for craft beer into Bethany R. Judge, who is a retired Buffalo police officer that decided she wanted to be a beer expert and pursue a certification that exists called a master cicerone.”

Miller’s goal is to publish the second book a year from now.

Miller, who works in the banking industry, and his wife, Tamara, are investors in a brewery in Bloomington, Switchyard Brewing Co. His idea was to have a live book signing in October but changed those plans because of the COVID-19 pandemic, with the book’s release being delayed by a month and Switchyard’s limited capacity in the tap room. Miller can send signed copies to people who order the book through his website.

Miller become involved in the craft brewing industry as a home brewer in the late 1980s.

“I was involved in this before it reached the fever pitch it is now,” he said. “I interned at a lot of smaller breweries to learn about it. Then I had an opportunity to work as an assistant brewer in Germany and then worked as assistant brewer in Wyoming. After that, I became more involved writing in the industry.”

Fluent in German, Miller is partial to traditional German-style beers.

“I still am a passional home brewer and the beers I make are the kind you find in Bavaria,” he said.