You are at:Home»Current in Carmel»Carmel Community»Carmel neurologist creates healing balms

An avid runner, Dr. Douglas Strobel was looking for a balm to prevent chafing and blisters while competing in endurance runs and obstacle courses.

Strobel, a Carmel neurologist, began his creation in his basement approximately six years ago. 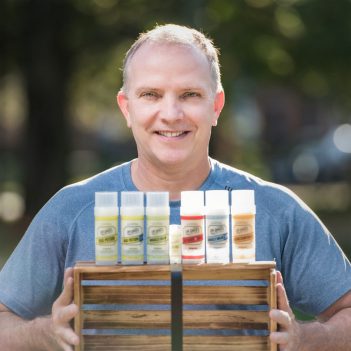 “I was making it for me, so quality control and aromatics weren’t much of an issue,” said Strobel, who now sells several types of Dr. Doug’s healing balms. “I was buying raw materials at Costco and online. I was using my kitchenware and pouring it into discarded deodorant containers and other jars that fit in my pockets. My (running) trail people, like family to me, were supportive of the product, and feedback improved it. Natalie Gardner, now co-owner, blew her feet up at an event, and she tried it and loved it.”

Gardner, a Carmel resident, has expertise in business development.

“We took my base formula and put it in a mini-muffin tray. Each little divot had a different additive formula with varying lavender, peppermint, even some we don’t use anymore such as linseed,” Strobel said. “(Gardner) wanted a product that had a clean finish. This meant no residue. So she’s rubbing this balm-A on one foot, and balm-B on the other, and walking across her wood floors as the light streams in the window. We knew it was right when she could wear high heels after an application and not slide out of her shoes.  It all started with my base balm, with some innovations that left no footprints on her hardwoods, to high heels, to where we are now.”

The balms are created from five organic ingredients. The original is Dr. Doug’s Miracle Balm and several others have followed. His latest product line treats diaper rash, acne and migraines. Strobel said he never dreamed the products would sell outside the running and hiking community.

“We made, and still make, a product that I called Race Rescue with a First Aid symbol in it,” he said. “People called it race+rescue, and most of our buyers weren’t racers, just people with pain, restless leg, bruising or whatever.  So even though our products are spot-on solutions for runners for 5K to 100 milers, it is popular with soccer kids, pool-siders, hunters, boy scouts and health professionals. The new name, based on how many we’ve learned who can benefit, is Recovery Balm.”

“One of my rules for success is to deliver happiness,” he said. “Most days I happen to do it as a neurologist. But I found an additional outlet with Dr Doug’s. My brain does not accommodate an anomaly. If we don’t have the solution I jump back into the lab and look for it.”

Strobel, who served in the Navy and Marines, praised Gardner’s contributions.

“I’d still be making small batches in my kitchen had (Gardner) not had the vision,” Strobel said. “So yes, I’m 50 percent of the business, but she does more in an hour than I could in a month. She is the brains in this outfit, I just tinker with the formula in the lab. That logo is me, but the labels and the finished product are all Natalie.”