“We were a little nervous, but we knew what we needed to do,” McNamar said. “We needed to focus for one or two hours and get it done.” 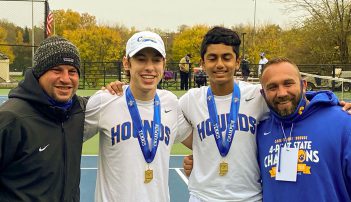 CHS coach Bryan Hanan said there was a bit of irony in McNamar’s accomplishment because Hanan, then a Center Grove senior, and his partner, Paul Fraley, lost to North Central’s Joe Stimming and Drew Alden in 1991. The previous year, Stimming and partner Joe Liddy beat Lawrence North’s Mike Bostic and Rick Browne. Bostic is a former CHS boys tennis coach.

“That brought up some bad memories,” Hanan said of his loss.

Malpeddi and McNamar will have only fond memories of their 28-1 record at No. 1 doubles. Hanan said the duo’s loss to Homestead earlier in the season was a wakeup call. Hanan enjoyed watching the duo develop a friendship. Malpeddi and McNamar used to be practice rivals during challenge matches.

“Now, they are laughing and hugging,” Hanan said.

McNamar won the state title with 2020 graduate Uday Lomada in 2019. The duo had played together at No. 2 doubles the previous season.

“So, we clicked really easily,” McNamar said. “With Srisanth it was a little tougher. We struggled a little bit earlier in the year but we kept getting better throughout the season and really stepped up (in the final).”

McNamar and Malpeddi, who didn’t drop a set in their 10 postseason matches, avenged their loss to Homestead in the Oct. 16 team state quarterfinals.

“After we won the state title, I think that really motivated us to get the individual doubles title,” Malpeddi said. “I feel like we work together really well and have good chemistry.”