You are at:Home»Current in Carmel»Carmel Community»Suspended Catholic priest reinstated, appointed to Marion church

A Catholic priest suspended from ministry in July has been reinstated and appointed to a Marion church.

Father Ted Rothrock, then pastor at St. Elizabeth Seton Catholic Church in Carmel, received the suspension after writing a bulletin article in late June strongly criticizing leaders of antifa and the Black Lives Matter organization, calling them “serpents in the garden” and stating that “their poison is more toxic than any pandemic we have endured.” 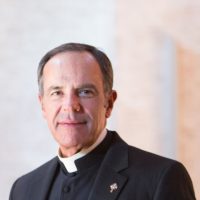 In a statement released Oct. 27, Bishop Timothy Doherty said the last few months have been filled with prayerful discernment for him and Rothrock.

“The pastoral care of the parish, the affected communities and Father Rothrock have been my main concern during this time of reflection,” Doherty stated. “Throughout this time, Father Rothrock and I have met on multiple occasions to discuss his well-being and plans for his return to public ministry. Based on these conversations, and after consultation with the Clergy Personnel Advisory Committee, I have rescinded the suspension issued to Father Rothrock on July 1, 2020 hereby restoring his faculties as a priest in good standing in the Diocese of Lafayette-in-Indiana.”

“Father Rothrock’s extensive pastoral experience in our diocese has allowed him to shepherd, guide and care for many people through a number of situations,” Doherty stated. “I feel confident he will be able to help the St. Paul community work through the unexpected death of their pastor.”

In a statement released by the diocese, Rothrock said he is feeling “refreshed and re-energized for ministry.”

“I’ve had time to reflect on my word choices from the summer and deeply regret the hurt and division I have caused, most especially within my beloved Saint Elizabeth Seton parish family,” Rothrock stated. “My time away has given me the opportunity to pray, read, and deepen my relationship with Jesus Christ. I wholeheartedly reject racism and anything that separates us from fully embracing the messages of the Gospel.”

See the full statement from the diocese at dol-in.org/pastoral-response-to-racism.