You are at:Home»Lifestyle»55 and Better»Column: For the love of baseball

Randy Stimac fielded his first ground ball in 1948 at the age of 2. He was sitting in the grass with his mother, watching his father play professional baseball for the St. Louis Cardinals’ farm team. A foul ball rolled towards Stimac, hit him right in the chest, and knocked him over. His mother says he did not even flinch. She knew right away Stimac would follow in his dad’s footsteps playing baseball. 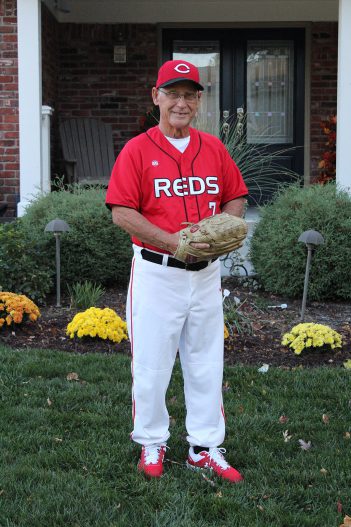 Baseball has kept Stimac in motion for 74 years. And he is still playing. This season at Grand Park in Westfield, Stimac took the mound. He plays in an over-48 adult baseball league consisting of former high school, college and even semi-pro players. His team was down 7-2 and Stimac came in for the third and fourth innings, throwing two shutout innings. His team went on to win the game 14-8, with Stimac picking up the win.

One of Stimac’s highlights on the mound came in 1961, pitching against the team with the famous Tommy John.

“Many younger folks are familiar with the term ‘Tommy John surgery,’ but they aren’t aware Tommy John was a professional baseball player,” Stimac said.

John was an All-Star pitcher for 26 years with the Indians, Dodgers, Yankees, White Sox and Angels. But back in 1961, Stimac was the winning pitcher, with his Otter Creek High School team beating John’s Terre Haute Gerstmeyer High School, 3-2. Stimac chuckles when he tells the story.

“Tommy played first base, he didn’t pitch in this game,” Stimac said.

After high school, with offers from colleges to play baseball, Stimac decided to attend Rose-Hulman. From Rose-Hulman, he then went on to the Army, where he also pitched for the Army baseball team. After serving our nation, he settled into a nice career of semi-professional baseball here in Indiana.

A few years ago, Stimac decided he wanted to pitch baseball again. At age 72, he joined Motion 4 Life Fitness.

“They have professional trainers who are knowledgeable.  They listen and understand my goals and create workout plans that are much more than a treadmill,” he said. “That’s just what I needed to get into the kind of shape I need to be in for not only playing baseball with the younger guys, but to be able to pitch again, too.”

Stimac credits his ability to pitch to his personal training each week and daily workouts at the gym. He also had a nice compliment from his family doctor recently.

“I went in to see her for my annual physical after a recent knee surgery,” Stimac said. “She could not believe how good of shape I am in and said she appreciated receiving the fitness assessment updates from Dr. Carol Weesner (Motion 4 Life Fitness owner and founder). M4L feels like family now. This gym is an important part of my life.”

The next time you hear someone singing, “Take Me Out To The Ball Game,” it just might be Stimac!

Chuck Vogt plays in the Hoosier Adult Baseball League and is a teammate of Stimac on the Reds.