Although many retail stores struggled during the COVID-19 shut down in March, the opposite was true for Moonshot Games in downtown Noblesville.

“When COVID hit, what was interesting for us was, we had no idea what to expect,” the Noblesville resident said. “We had no idea if we were going to make it, if people would care about board games. We kept our hourly folks on as long as we could but we did furlough some.” 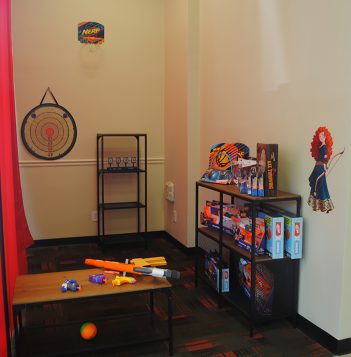 There’s a Nerf range inside the new Moonshot Toys.

When Moonshot Games received a Small Business Resiliency Grant from the City of Noblesville, Manship gained the confidence to hire back some of the employees.

Then, the board game shop saw sales increase.

When the lockdown began, one of Manship’s employees moved in with Manship and his family to help conduct business out of Manship’s garage.

“We didn’t know what was going to happen with the talk about statewide shutdowns, so I came in here to the game store with my truck and trailer and loaded up every board game in store and took them to my house,” Manship said. “The store manager moved in with my wife and I and quarantined with us and lived in our guest room for 45 days and started e-commerce.

“We didn’t have a website going into COVID, so we started selling board games on the website and selling them out of our garage.”

Moonshot Games’ sales are 300 percent higher than this time last year. The boom led to the company opening a holiday pop-up shop, Moonshot Toys, a few blocks from its current location at 50 N. Ninth St. Moonshot Toys is on the first floor of The Gordon Building at 110 N. Ninth St.

The Gordon family also owns the building housing Moonshot Games, so Manship reached out to the family.

“They are planning a restaurant (on the first floor of The Gordon Building), and they are seeking a prime restaurant partner and are waiting until spring to move the needle,” Manship said. “So I asked, ‘What would you think about me opening a holiday pop-up store?’”

Moonshot Toys opened Oct. 1 and will remain open for 90 days throughout the holiday season.

To date, sales have been strong.

“Sales have been awesome,” Manship said. “What we would like to prove between now and Christmas is, if people do want this, we will explore putting a toy store on the square somewhere else. Our long-term plan is to have four different Moonshot locations in and around downtown Noblesville.”

The plan would be to have a board game shop, a toy shop, a standalone puzzle shop and a collectibles shop. 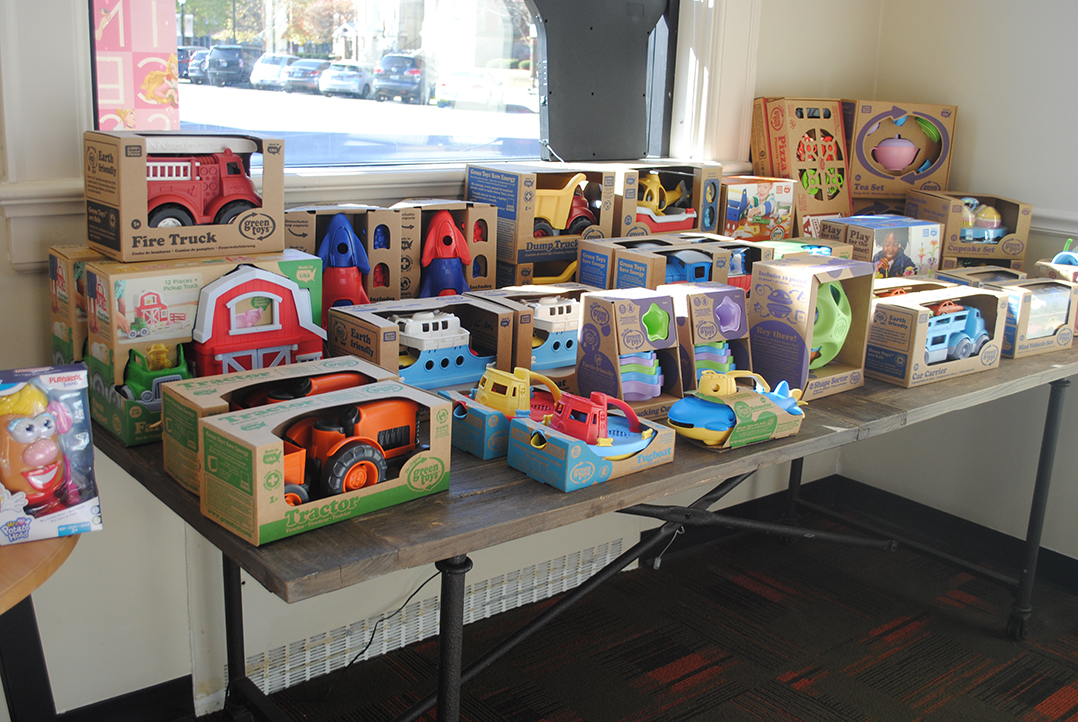 Some toys at Moonshot Toys are eco-friendly.

Noblesville resident Jayson Manship launched Moonshot Games in 2017 when he determined that people spend too much time on social media.

“We live in this toxic social media culture, and games are something that can help create human interaction and human conversation,” Manship said. “We really strive to get folks playing around a table together. Our primary focus was around mental health and around the concept that people could find competition, find cooperation, find fun with sitting around playing a board game.

“We wanted to do something cool and interesting and thought that was a cool business and cool community opportunity for downtown Noblesville.”

Manship previously owned an internet marketing company on the upstairs floor of The Gordon Building while the downstairs was vacant. He tried to open a high-end art gallery but felt that didn’t fit downtown Noblesville, he opened Moonshot Games instead.

“We wanted something different and accidentally stumbled into board games,” he said.