You are at:Home»Current in Fishers»Fishers Community»Fishers council approves 190 rental units on 116th Street 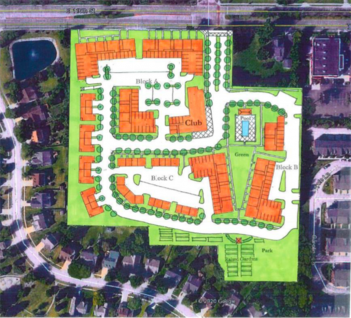 A rendering of the Maple Del development on 116th Street. (Submitted image)

The 10-acre property was previously unincorporated, but the developer plans to annex it into the city corporate limits.

The $30 million project includes 190 units, with 164 garden-style units, 18 three-story townhomes, eight two-story patio homes and 352 parking spaces.
“We wanted this to feel like a neighborhood within the city instead of just a detached multi-family project that didn’t incorporate and didn’t blend well,” economic development director Megan Baumgartner said.

The economic development agreement guarantees that 100 percent of TIF funds will remain within the development during the next 25 years, estimated at $6.1 million.

Tom Dickey, managing director of real estate with The Hageman Group, presented to the council prior to the vote. He responded to concerns regarding the development, including those community members worried that Fishers is outpacing other communities with apartment developments. Although Fishers has increased its apartment housing by 3 percent since 2000, it still trails Carmel, Noblesville and Zionsville in the percentage of rental options. The national average for apartment housing within a community is 22 percent. Fishers is at 16 percent.

Another concern is the development causing a burden on public safety and the government budget.

“This is actually the opposite of that,” Dickey said. “The infrastructure on 116th Street is already there. The only public infrastructure improvement to 116th is at the light. There will be a new left turn lane going west and a sidewalk funded by the developer.”

Dickey also said there wouldn’t be a negative impact on the Hamilton Southeastern Schools district. The developer, JC Hart, expects 10 percent of units to have one student. But with an estimated $24 million of assessed value, Dickey said the impact won’t be negative.