You are at:Home»Current in Westfield»Westfield Community»CrossFit gym opens second location in Westfield

Together We Rise Fitness recently opened its second location in Westfield. The CrossFit gym has operated in Fishers for approximately six years. 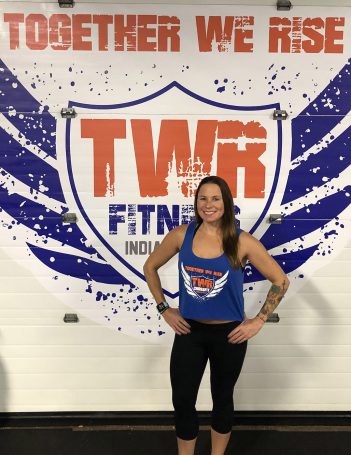 Monica Hilton pauses in Together We Rise. (Submitted photo)

Owner Monica Hilton plans to expand the new location as memberships are added.

“The idea behind it is as membership is going to grow. The gym will grow at the rate of membership growing,” she said. “So, we will add classes as needed. We are starting with a small group and adding classes, coaches and equipment as it grows.”

“The gym started as a group fitness gym six years ago, and primarily our focus is on CrossFit now because we found people really enjoy the CrossFit classes,” Hilton said. “We are primarily just CrossFit classes, but one caveat I always add is, a lot of people think they know what CrossFit is. The myth is it’s intimidating, or you have to be super fit, but one of the things we do best is we can scale anything for anybody, so we have all fitness levels, all ages. There are options in class for everybody.”

Hilton lives in Lawrence but plans to move nearer to Westfield and Fishers.

“Westfield is just one of those really cool places that we feel it has this small-town vibe and the genuine kind of people we are looking for, but it’s growing so much. We want to be able to serve that market,” Hilton said. “It came about because there was a core group of people that asked us to open a second location there.”

New members can join the Westfield location for $115 a month, but the rate will increase to between $139 and $159 a month for new members as the gym grows. Hilton said she plans to add a third and fourth location in the future.

A grand opening is planned for 9 a.m. to noon Oct. 31 at the new location. For more, visit twrfit.com.