You are at:Home»Current in Carmel»Carmel Community»Late Carmel attorney remembered as ‘champion of history’

A longtime Carmel attorney is being remembered for his role in redevelopment of the Arts & Design District.

Carmel resident Curtis Butcher, 81, died Oct. 19. He began practicing law in Carmel in 1975, and 10 years later bought the building on the northwest corner of Main Street and Range Line Road, where he moved his office to the second floor. 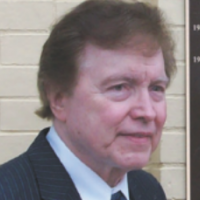 The building — on the site of a former trading post used by a French fur trader — was completed in 1923 to house Citizens State Bank. In 1938, it became Brown’s Drug Store, then became home to Union State Bank from 1954 to 1972. Several insurance agencies officed there until 1985, when Butcher bought the building.

“Mr. Butcher was a ‘gentleman’s gentleman,’” Moriarity said. “He was always smiling, patient, helpful and ready to do anything he could to improve the Arts & Design District. We will certainly miss him.”

Mark Dollase, vice president of Indiana Landmarks and on staff for the Carmel Historic Preservation Commission, said he got to know Butcher after Mayor Jim Brainard appointed him to the commission in 2012.

“I didn’t know Curtis before his appointment, but quickly grew fond of him due to his great wisdom, sharp legal mind and sense of humor,” Dollase said. “Curtis was always enthusiastic about the mission of the preservation commission, as he valued the city’s heritage and was the steward of a historic building himself. He will certainly be missed by myself and his fellow commissioners.”

Brainard described Butcher as a “champion of history in Carmel.”

“With his purchase of the building at the corner of Range Line Road and Main Street, he was among the first to show faith in what was then our old town district,” Brainard said. “He served on our city Historic Preservation Commission and played an important role in shaping what has become the Arts & Design District. His contributions to Carmel will continue long beyond his lifetime.”

Butcher was born Aug. 11, 1939, in Monroe County. He earned degrees in law accounting from Indiana University. He served as Indiana’s deputy attorney general for two years.

Family and friends gathered for a funeral service Oct. 24 at Northview Church.