You are at:Home»Current in Fishers»Fishers Community»Naik creates clay sculpture for Hindu festival 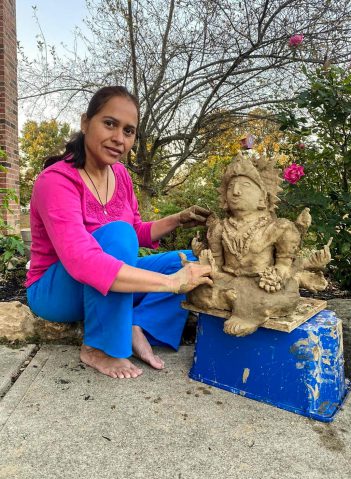 Kalpana Naik found a marriage for her passion for art and her Indian culture.

“It is my passion to create unique art forms,” Naik said.  “I have been making sculptures with natural clay for a long time. I have done several charity art events with children with Down syndrome Indiana and other nonprofit organizations.”

“The natural clay icon sculpture for the goddess Durga Mata is created for the Navratri,” said Naik, who has lived in Fishers for 15 years. “On the 10th day, Mata Durga is immersed in water, based on the old belief that humans are made up of five elements, earth, water, fire, air and space. The water being one of them is most commonly used for purification rituals. Everything in this universe that comprises name and form is subject to dissolution. Everything returns to earth and will emerge again, as an unending cycle of evolution and involution.”

Naik has been making clay sculptures for more than eight years. She made one for another event at the Hindu Temple

“The Navratri, which spreads over nine nights and 10 days, is one of the most revered festivals in Hinduism and celebrated during the autumn season,” Naik said. “It lays importance on the worship of Goddess Durga or Shakti, which represents the energy of the universe in her nine different forms. Typically, the festival’s nine nights are dedicated to different aspects of the divine feminine principle, or shakti (energy).”