You are at:Home»Current in Zionsville»Zionsville Cover Stories»Full speed ahead: Racing team to build global headquarters in Creekside Corporate Park

Correction: The space RLL intends to purchase in Creekside Corporate Park has an appraised value of approximately $2.93 million, according to town officials. The site is intended to be conveyed to RLL for a purchase price of $10, in exchange for developer’s obligations. A previous version of this story stated the property was already purchased.

An auto racing team has announced plans to build a global headquarters in Zionsville’s Creekside Corporate Park in a deal that bolsters the town’s long-term economic development goals.

Rahal Letterman Lanigan Racing will invest more than $20 million to build its headquarters at the northeast corner of Creek Way and 106th Street. The project will create an expected 73 new jobs by the end of 2024, according to the company. Wayne DeLong, the town’s director of planning and economic development, said the headquarters would also create assessed value, which would be funneled into the area’s tax increment financing district.

The 100,000-square-foot facility, which will occupy 13.32 acres, will allow RLL to consolidate its existing operations in Brownsburg and Ohio. The facility will have office and event space as well as automotive research and development and light manufacturing operations to support RLL’s racing teams. The headquarters also will allow the company to move forward with plans for a race shop, company officials said. The company expects to break ground on its headquarters later this year and be fully operational by spring 2022, according to a release. 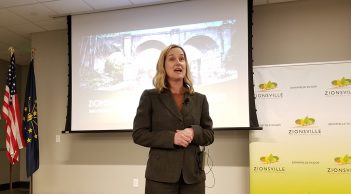 Zionsville Mayor Emily Styron’s has often stated that one of her goals for the town is to foster economic development, particularly by filling Creekside Corporate Park. (Photo by Jarred Meeks)

Zionsville Mayor Emily Styron’s has often stated that one of her goals for the town is to foster economic development, particularly by filling Creekside Corporate Park. As early as late February, during her State of the Town address, she announced that RLL had expressed interest in moving to the business park.

“We feel that this building will make a statement about who we are at RLL and what our intentions are about the future,” Rahal stated. “Having our entire organization based in the Indianapolis area, in Zionsville, is going to be a big plus for our organization. We have done a great job of having two facilities, as is showcased by our wins in the Rolex 24 at Daytona and the Indianapolis 500 this season, but it is certainly demanding having people in two places. We have had time to really look at the building and design every aspect with input from our personnel to maximize the space.”

“I am personally very excited and honored to be working with the town of Zionsville,” Lanigan stated. “I used to live in the area years ago and look forward to our team integrating ourselves into the community and their various programs. Having our racing teams under one roof will not only maximize our abilities, it will provide economies of scale to keep the cost down. That savings will enable us to reinvest more back into the company.”

A new approach to filling Creekside

ities and towns often offer tax abatements, in the form of a stair-step, 10-year deal, to attract companies. But to draw companies to Creekside Corporate Park, Zionsville has taken another approach.

The space RLL intends to purchase in Creekside Corporate Park has an appraised value of approximately $2.93 million, according to town officials. The site is intended to be conveyed to RLL for a purchase price of $10, in exchange for developer’s obligations.

“After the appraisal process, we did advertise the available lots for sale through the public bidding process that ended in June,” Zionsville Economic Redevelopment Commission member Sanjay Patel said during a September commission meeting. “At that time, we did not have any interest at the advertised price.”

Town officials said it was the second time lots in the business park had been advertised.

To renew interest, officials decided to offer the lots RLL purchased at below market value as opposed to offering a tax abatement. Town officials said during a September redevelopment commission meeting that the offer allows the town to collect taxes and reap other benefits that will equate to the $2.93 million figure within approximately fewer than 10 years. Patel said the deal is part of the long-term benefit of developing the business park.

“We’re not making any taxes on it now as it sits empty,” Zionsville Redevelopment Commission member Kent Esra said during a September commission meeting.

DeLong said the town will consider both ways of attracting companies in the future, adding that future projects’ cost of entry could be “closer, if not at market (value).”