You are at:Home»Current in Westfield»Westfield Community»Willis addresses concerns about golf cart ordinance

The Westfield City Council is not considering rescinding the golf cart ordinance, but it is listening to concerns from residents.

Westfield City Council member Scott Willis, who represents District 1, discussed the ordinance during a session with constituents Sept. 17 at The Bridgewater Club. Willis said the city council plans a public forum to discuss the ordinance when more people can attend, so no date has been set. 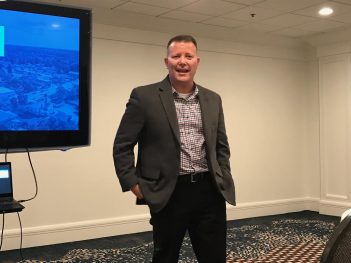 Willis said District 1 is the only district impacted by the golf cart ordinance. Westfield resident Teri Kimpel launched a petition this summer to rescind the ordinance after her husband was nearly injured by a cart while cycling. Willis said he has probably received 150 emails on the issue, with residents both for and against the ordinance.

Westfield City Council member Cindy Spoljaric, who attended the meeting, said she has probably gotten more than that with more negative comments.

“The Midland Trace Trail is a trial ground for use of golf carts on the trail,” Willis said.

The carts are allowed on the stretch of Midland Trace Trail between Carey Road and downtown Westfield.

Willis said the decision was made because District 1 includes the Bridgewater golf course and other neighborhoods that tie into it.

“That ordinance was passed in 2017 and the carts can’t go on roads that have a speed limit of more than 25 mph,” he said.

Carts have to be registered with the city.

“This is where we, as residents, are messing it up because we are not registering our golf carts,” he said. “They have to have all the safety features a car would have. The other thing really messing us up right now is underaged kids driving these golf carts. This is never going to work if we don’t have licensed drivers driving on these trails because it does add an element of danger to our residents.”

Willis said 11 complaints have been filed with the Westfield Police Dept., one each in 2017 and 2018, seven in 2019 and two this year. No charges have been filed as a result of the calls. The majority of complaints were related to carts on the path.

Willis said most of the 11 complaints were made because residents didn’t know carts were allowed.

“There haven’t been any crashes or near-misses reported but I’m not saying there hasn’t been near-misses on the trail, but no one has called it in,” Willis said. “Out of fairness to those that hate golf carts, I’m sure there have been near misses.”

Willis said he has a golf cart and he and his children take it around a lot.

“I thoroughly love getting on the cart and going down the trail to Greek’s Pizzeria and grabbing a pizza,” he said. “From the city perspective, it’s a win. It’s one less car on the road, less usage of our roadway system. It’s a clean form of energy unless you have a gas-powered one. Saying that, do I think the trail system is completely safe for everyone and all the different types of uses? No, I do not. There are blind spots. We have to have mirrors on a pole to see around the blind corner.

“On Midland Trace, there are hills with winding parts that get very dangerous if you got some kid flying down at 25 mph. We have to address that.”

Willis said Mayor Andy Cook’s vision is to have a golf cart-friendly community.

“We are not there yet,” Willis said. “The mayor is working on it, but (there is) infrastructure (and) cost, and there a lot of things we’ve got to do to get it done.”