You are at:Home»Current in Geist»Geist Cover Stories»In the works: Fort Harrison Cultural Campus is undergoing three phases of construction simultaneously

When the Lilly Endowment awarded his organization with a $5.85 million grant to construct a cultural campus, Bruce Hugon had a realization. 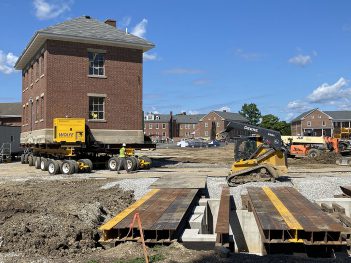 “In 2019, it suddenly hit me, ‘Oh, my god, now we to actually build this thing,’” said Hugon, co-vice president on the Arts for Lawrence Board of Directors.

More than two years later, the Fort Ben Cultural Campus project is in its second, third and fourth phases. Executive Director Judy Byron wants to reopen arts programming and unveil the campus in the spring of 2021, if health conditions permit.

The three phases in progress consist of building additions onto the Theater at the Fort, repurposing the Fort Harrison communications building as a visual arts center and constructing a plaza. The final phase funded by the grant refers to installing artworks in the spaces.

As Byron envisioned during the grant proposal process, the campus will be scattered with interactives. A musical swing set and augmented reality app are planned.

“Developing the interactive art pieces has been my absolute favorite,” Byron said. “Knowing that the musical swings are coming, knowing that we have someone designing an augmented and virtual reality for us that is going to be really cool, commissioning artists to create artwork on the campus that will be beautiful has been a super delight.”

The augmented reality app was designed to inform visitors on the history of Fort Harrison through their smartphones. The integration of history and technology was the philosophy behind multiple installations on the campus, according to Brian Norris, Arts for Lawrence board member and Bowen Technovations tech designer.

“Kids these days, as they say, love technology,” Norris said. “(When I was) working in museums, that’s always a big thing. Having that ability to have the technical aspect and the artistic aspect meet in the middle is exciting.” 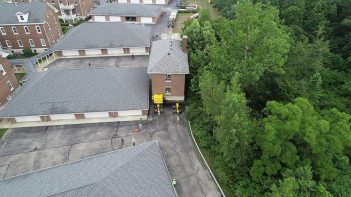 Although the project is ahead of schedule, Norris said the COVID-19 pandemic temporarily brought operations at Arts for Lawrence to a “screeching halt.” But he said the slowdown allowed the team to reevaluate and improve how it will handle construction moving forward.

Byron also was pleased with her staff’s response to the pandemic. Even though the members were split between developing virtual arts programming and continuing work on the campus, she said they were amply skilled and knowledgeable to withstand the added strain.

“I’m really proud of my staff,” Byron said. “They have been so flexible, and they’ve come up with great creative ways to still fulfill our mission, which is to inspire everyone every day through the arts.”

According to Byron, Norris and Hugon, Arts for Lawrence anticipates drawing visitors from throughout Marion County and other parts of the state.

“It’s going to be a very, very cool addition to this part of the county, and the City of Lawrence and the City of Indianapolis,” Hugon said. “We hope to make this a destination. It will, I’m sure, be something special.”

The installation of musical swings on the Fort Ben Cultural Campus was meant to be temporary. Executive Director of Arts for Lawrence Judy Byron said that her team planned to replace the swings with a more site-specific design in the future.

To her surprise, the Lawrence community embraced the musical swing set and advocated for a permanent fixture on the cultural campus.

“Everybody loved the musical swings so much and were kind of adamant that we bring them back,” Byron said.

The musical swings, designed by a Montreal-based company, play different melodies and light up at night. Byron said they connect with the community.

“We had a 100 percent positive reaction (to the swings),” Byron said. “They brought people in from over 60 central Indiana ZIP codes.”