Traffic stops, security checks and training exercises are all part of the job for Megan Soultz, a night shift officer for the Carmel Police Dept.

But lately, her duties have expanded to include helping to craft and review the City of Carmel’s response to the COVID-19 pandemic and sharing what she’s learned with a national health care firm to help battle the disease on a larger scale.

Unlike most police officers, Soultz has a master’s degree in biology, so when a leg injury forced her into a light duty assignment in April, the project seemed the perfect fit at the right time. 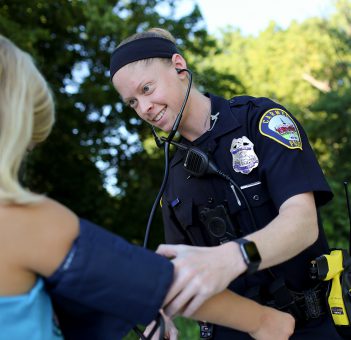 Carmel Police Dept. officer Megan Soultz, who has a master’s degree in biology, has helped the City of Carmel develop its response to COVID-19. (Photo by Ann Marie Shambaugh)

“Having a background in biology and having taught some of those things in the paramedic science program, I can understand how the (COVID-19) research is laid out. I can understand the methodology a little bit,” she said. “Being able to read and digest the information that’s coming out of those scientific papers was how I was most helpful with a master’s degree in biology as a night shift patrolman.”

For Soultz, becoming a police officer wasn’t always the plan. A 2006 Carmel High School graduate, she received her first EMT certification when she was 19 and began working on ambulances with Putnam County Operation Life during her freshman year at DePauw University. She earned a bachelor’s degree in biology from DePauw, where she was a top softball player, and went to IUPUI for her master’s degree.

After graduating, Soultz accepted a job with Indianapolis EMS that included teaching paramedic science, and she became a tactical medic for the Indianapolis Metropolitan Police Dept. SWAT team. It was during SWAT team calls that she realized she may have chosen the wrong career.

“I couldn’t go in all the way if it wasn’t quite safe, or I couldn’t be the one to go in and catch the bad guy,” Soultz said. “There’s only one way to do that, and it’s to reverse my role, so I became a police officer, and I’m still a state-licensed paramedic.”

Soultz applies her medical background as a CPD officer, responding to calls where her expertise may be helpful and training other officers how to respond to medical emergencies. She also teaches an EMS Awareness Class for the Indiana Law Enforcement Academy.

So, when the City of Carmel decided to put together a plan to prevent the spread of COVID-19 locally, including requiring first responders to be tested for the virus weekly, CPD realized Soultz could be a valuable resource.

In addition to reading news articles and research papers on COVID-19, Soultz reviewed data and looked for trends among city employees and their families tested for the virus. When the city offered COVID-19 antibody testing for the same groups, she analyzed that, too, looking for information on the spread of the disease.

Soultz passed her research along to Minnesota-based UnitedHealth Group, which is analyzing it to find information that may be useful in the broader fight against COVID-19. Few places have tested a similar group so frequently, so the data could be a valuable tool for studying the spread of the disease.

“We have been testing police officers and firefighters weekly, which is pretty unique,” Soultz said. “Now, we’re doing antibody testing. Having that data to compare side-by-side for an extended period of time is not something a lot of places have access to.”

UnitedHealth Group hasn’t yet shared its analytics, but Soultz said she has developed some theories from looking at the data. Among her most significant takeaways so far is the amount of research still to be done on a global scale.

“The most surprising thing for me is how little we know,” she said.

CPD Chief Jim Barlow described Soultz and her work as “an incredible asset” to CPD and the City of Carmel. 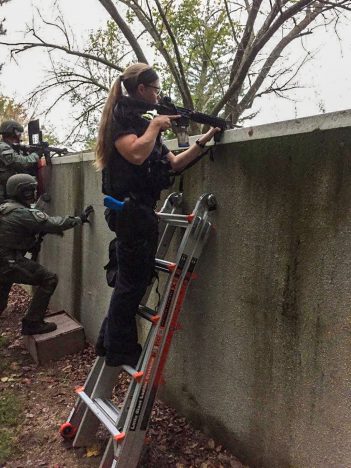 “She is a great example of an officer willing to step up and put in extra effort to further the city’s goals,” Barlow said. “Her skill set, past experience and education made her a perfect complement to the city’s team that was assembled to create a local response to the coronavirus.”

Soultz is still offers her assistance in battling the pandemic locally, but now that she’s recovered from her leg injury, she’s glad to be back to her regular duties, which include serving as the first woman on CPD’s SWAT team.

“As much as I loved working on this project, and it was an honor to help the city with this, I also love being a police officer,” she said. “There’s a reason I have a master’s degree in biology and don’t work in a lab.”

Megan Soultz got a bit of an unexpected job experience during a college internship with the New York City Fire Dept.

On Jan. 15, 2009, she was a first responder at the “Miracle on the Hudson,” which occurred when US Airways Flight 1549 lost engine power after striking a flock of Canada geese and made an emergency landing in the Hudson River. All 155 people aboard the plane survived.

Soultz said she didn’t see the plane in the river or meet the plane’s captain, but she helped triage passengers as they came off rescue boats.

It’s not a scenario she’s likely to encounter in Carmel, but Soultz is grateful for the opportunity to have served and learned at such a large-scale event.

“That was not on the list of expectations (for the internship), for sure,” she said.