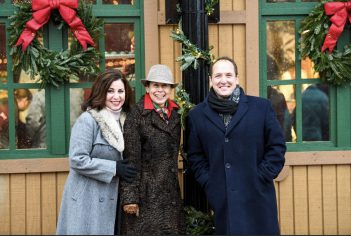 Actors Theatre of Indiana cofounders Don Farrell, Judy Fitzgerald and Cynthia Collins have been brainstorming ways to perform in 2020.

ATI has canceled its 2020-21 season, which was scheduled to begin Sept. 4, due to the restrictions with the coronavirus pandemic.

“We’re partnering with the city and they’re lending us their fancy stage,” Farrell said.

The sponsors are United Fidelity Bank, City of Carmel and Surroundings by Natureworks+.

There is a limit of six people per car.

The first performance will include the cofounders. Terry Woods will be the music director. Tim Hunt (vocals), Greg Wolff (percussion) and Greg Gegogeine (bass)

“Terry was our musical director all the way back when we started in 2005, so he’ll be rejoining us on keyboards,” Farrell said. “The first performance will be songs that were in soundtracks from different movies, kind of keeping with the theme of drive-in movie theaters. We’re really excited about it being a time when the community can come together but social distancing. Everyone is in the safety of their own vehicle or they can bring their chairs. They have to be in the vicinity of their vehicles.”

Masks are required outside the car.

“We’re talking about frequency through radio as well,” Farrell said.

Farrell said the stage overhang should cover the performance area if there is a light rain.

Farrell said ATI is working on content for the Oct. 23 performance. The Nov. 27 performance will include holiday music.

Congregating around the parking lot and stage is not permitted. VIP tickets are $120, which includes priority parking, two ATI face masks and an appetizer coupon from Donatello’s Italian Restaurant in Carmel. Tickets in the pavilion area is $100 and lawn is $60. For more, visit atistage.org.

ATI’s production of “Alabama Story” was the first for the play in Indiana, debuting in October 2019. A virtual stream of the production will be available from Sept. 27 to Oct. 10.

The show will start on the day of Banned Books Week, which celebrates the freedom to read.

“Alabama Story” tells the true story of an Alabama state senator trying to ban a children’s book about a black and white rabbits called “The Rabbits’ Wedding” because he believes it promotes integration and interracial marriage in 1959 in Montgomery, Ala. A no-nonsense librarian, Emily Wheelock Reed, who was an Indiana University graduate, fights the censorship.

Farrell said there will be a virtual event Sept. 27 with the cast members, playwright Kenneth Jones and director Jane Unger. Farrell played the state senator and Collins played the librarian.

“We can answer people’s questions and talk about the play,” Farrell said. “People can watch that before we launch the stream of the archive (play). It’s going to be a wonderful night celebrating a great play. We’ll have a closing Oct. 10 where we’ll bring everyone back in again virtually.”

The play was filmed by Zach Rosing and Philip Paluso of Fishers-based Medium Cool Pictures. They shot some B-roll, extra footage to enhance the production, which will be spliced in.

The cost of the stream has not yet been set. It will be uploaded to a secure server, which can be shared all around the world.

“It’s kind of like a pay per view,” Farrell said.