You are at:Home»Current in Westfield»Westfield Community»Proposed Westfield development could bring housing, general business 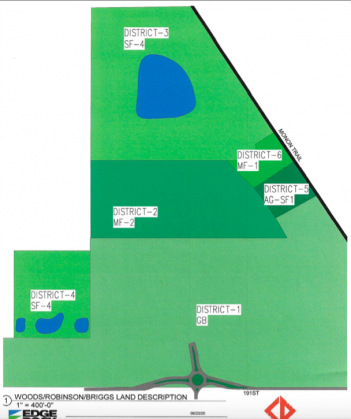 The development, called a planned unit development called the Woods-Robinson-Briggs, is proposed north of Grand Park with the south border along 191st Street.

Dalton said the proposal originated from four landowners and could evolve into a “high-quality PUD.”

The proposal includes homes constructed by David Weekley Homes and indoor/outdoor tennis and pickleball facility, a church and commercial development.

“You’ve got very good landowners who worked hard on this, and there are many uses from dentists’ offices and medical to it,” Dalton said.

Dalton asked for general business zoning for the commercial portion of the proposal, but he made clear there would be certain exclusions to work through.

“My vision on it and my belief and the experience with COVID-19 is the general business is wanting to get maximum flexibility on the type of uses we put here, both in the pandemic environment we’re in now and hopefully post-pandemic,” Dalton said. “I want to have, for the families selling the ground and the users coming in, the maximum flexibility with proper exclusions so I’m not penned into something like with the Link PUD, where it’s (limited) zoning and the majority of it is closed – the hotel, the family entertainment center and the museum – during COVID.

“I ask to have an open mind here, a working relationship, and I look forward to detailed comments from each of you.”

Since the proposal was an introduction, no vote was taken. A public hearing is scheduled for the Advisory Plan Commission’s Sept. 8 meeting.