You are at:Home»Current in Fishers»Fishers Cover Stories»Going the distance: Man plans to bike 8,428 miles to fundraise for orphanage in India

Fishers resident Dan Farrell is passionate about cycling and giving back to others, so he wanted to connect the two.

That’s why the 73-year-old biked 8,428 miles this year to raise $50,000 for the completion of Faith in Deeds, a new orphanage in India, which needed $50,000 to complete. Farrell determined the cycling mileage on the distance from Fishers to India.

“I wanted my passion for biking to lend itself to helping others in some way, shape or form,” he said. “It was kind of challenging to see how you could bring those two together.”

After learning about Noblesville resident Dave Schweikert, who biked for 24 hours around a roundabout in Carmel, Farrell figured he could accomplish a similar feat.

To reach his mileage goal, Farrell bikes to and from work each day. He works at Frontier Communications in Cicero as a safety manager.

Each morning, he begins biking around 5 a.m. He leaves his Fishers home, makes his way to Carmel on 116th Street, then hops on the Monon and takes the trail north to Sheridan. Then, he returns from Sheridan to Westfield, uses the Midland Trace Trail to get to Hague Road and then takes Hague Road to Cicero. He bikes three hours each morning.

“I’m not very speedy, so I get about 42 miles in there, and then at night, on the way home, I’m able to pick up 20 or 25 or sometimes 30 miles or so by taking country roads from Cicero back to Fishers,” he said.

Farrell, a year-round cyclist, bikes with a Salsa Vaya Touring.

“I do bike in the winter,” he said. “When things get messy, I have a fat-tire bike, which is a bike that has extremely wide tires that are 4 inches wide. What’s nice about that is, they go in snow, ice, sand. You can use them just about anywhere. That’s a Salsa Mukluk.”

Farrell became interested in cycling after he ran marathons and half-marathons for several years.

“That takes a toll, so I was looking for something a little less stressful,” he said.

Through the years, Farrell has biked in Canada, Estonia and Sweden and has taken several tours throughout the U.S.

He began taking cycling seriously in the mid-1980s.

“I just wanted to be in a position where I could bike back and forth to work,” he said. “So probably eight to 10 years ago, I came up with the logistics and planned out how I was able to bike back and forth to work. I’ve done that a number of years and really enjoyed it. It’s one of those things that seemed to be physically demanding to some degree, but I’m a morning person, so that helps tremendously to get that excitement and inspiration up in the morning with that type of thing with the sun rising.

“Biking to me has really been the type of experience in which you’re able to, one way or another, be in tune with nature. It’s a great form of exercise, it’s a green way of transportation and it’s been a win-win all around.”

To track Farrell’s progress or to donate, visit oneorange.org/ride-to-india/. 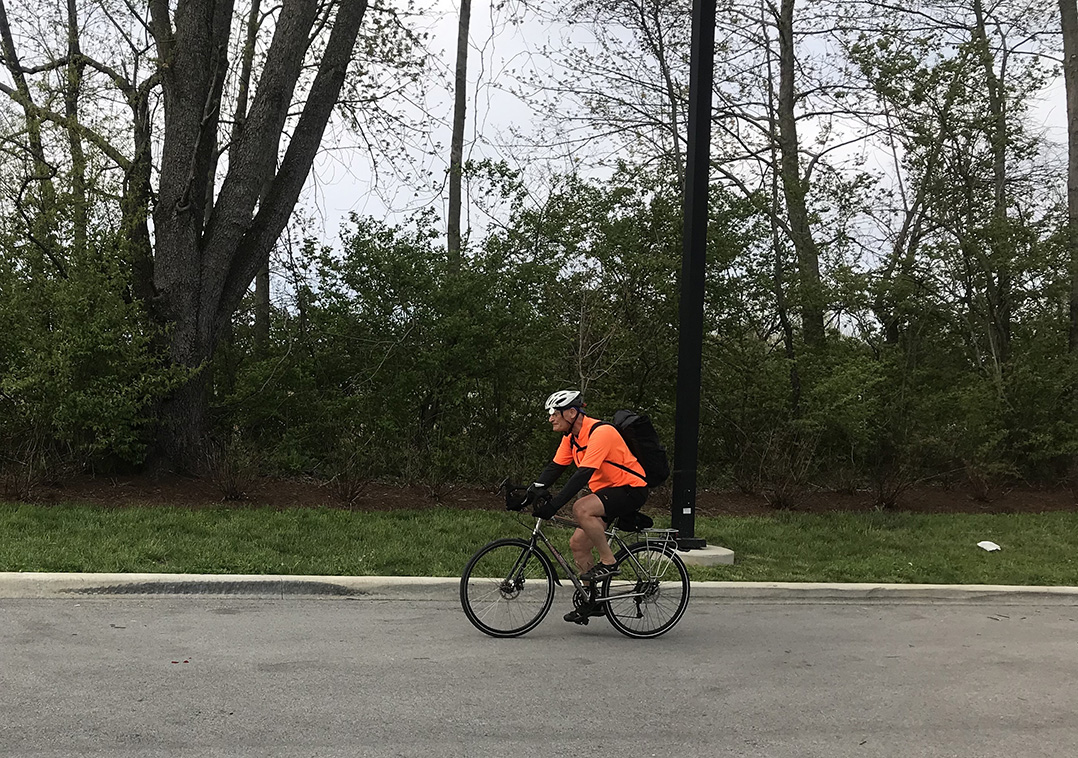 Dan Farrell, 73, rides his bike to and from work each morning. (Submitted photos)