You are at:Home»Lifestyle»55 and Better»Retired philosophy professor releases poetry book

Edmund F. Byrne always loved poetry, but he didn’t always have time to devote to it.

“I began writing poems some 40 years ago,” said Byrne, IUPUI philosophy professor emeritus. “Early on, comparatively few of them were of publishable quality, in part because my time was then focused on professional academic writing as a philosopher. I became more focused on my poetry after retiring in 1998 after 29 years at IUPUI and even more so after the death of my partner Anne Donchin in 2014. 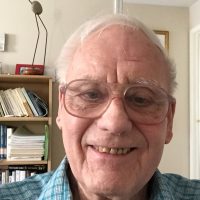 “From New York where we had been living, I then returned to the Indianapolis area, where I bought a house in Carmel.”

In 2017, Byrne, now 87, became one of the founding members of the Carmel Poetry Group, which for two years had live meetings but now meets virtually.

“My recent publication consists of 28 poems, most of which were written during my time with the poetry group, and each of these was critiqued by them, but it includes several quality poems from earlier times,” he said. “To quantify, I’d say some 85 percent of the poems in this book were written in the last two to three years.”

The book’s description is, each of the poems addresses a problem that human kindness has failed to resolve sufficiently, thereby to enhance people’s ability to improve the world as we know it.

The poems are divided into five categories in the following order: Destructive activities known personally by the author; examples and illustrations of issues that compromise the ability of families to thrive; failures in the political realm that undermine social well-being; critiques of the human propensity for war; and some of the author’s experiences reflective of ecological woes in the world — greater openness to others in our attitudes could improve the world in which we live.

“I arrived at this description almost automatically after having arranged the poems in similar groupings and then identifying the topic each group was about,” he said.

This is Byrne’s second book of poetry. In 2018, he published “Towards Humanizing Humans: Hopeful Poems.” He also included a section of poems in his memoir “Remembering My Self” in 201. He also had approximately a dozen poems published in various outlets for writers, such as “Writers and Readers Magazine.”

Byrne, who received the IUPUI Spirit of Philanthropy Award in 2019, joined IUPUI in 1969 and helped establish the Dept. of Philosophy (the first department in the IU School of Liberal Arts). Byrne created the E. F. Byrne Peace Studies Award to encourage liberal arts faculty and students to examine the destructive effects of particular technologies, business and/or religious practices, et al., especially when directed toward war. Byrne also created the Donchin and Byrne Women’s Studies Student Fund in Anne’s memory.