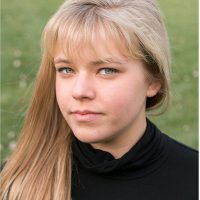 “It’s more characterization work because you want the audience to have a clear understanding you are playing three different people,” Allenson said. “It was a lot more work in creating three completely different characters, but the writer (Don Zolidis) really helps with that. He’s brilliant. Each monologue is incredibly unique.

“I have had some experience before doing ensemble-type shows and played different characters, but not as starkly contrasting as these three girls I’m playing,” Allenson said. “I love the characterization process no matter what show I’m in, and this was especially fun since I got to do that times three.”

The cast has been rehearsing in person in face masks since July 29. Previously, it was rehearsing virtually.

“We’re going to perform in face shields so you can see all the expressions,” Allenson said.

“Funny enough, I played their teacher in that show as well,” Haas said. 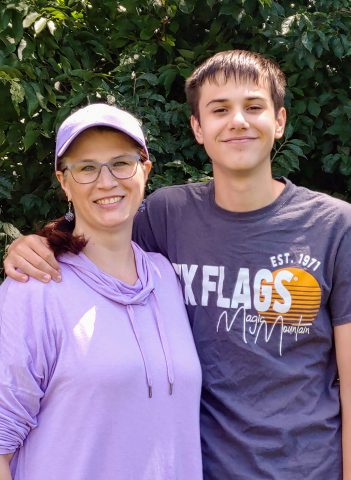 Tanya Haas and her son Charlie appear together in a production. (Submitted photo)

Haas has been in three other Westfield Playhouse shows.

“I have been a big supporter of the Westfield Playhouse over the years,” she said. “Besides appearing in shows myself, most of my children have also appeared in Westfield shows over the years. When (producer) Tom Smith pointed out to me that I would be speaking the very first lines on the new stage, I was really honored. Originally, I was scheduled to direct a full youth production for the Playhouse this summer, which I was very excited for. When current circumstances made that production unwise to produce due to social distancing guidelines, the idea for this show came up. I did not feel I was the best person to direct a monologue show, so I happily turned the new show over to Brandi Davis. When the opportunity arose for me to actually be in the show, I was more than happy to take the role. Having worked with a few of the young cast members previously as an actor or director, and having seen quite a few of them in other productions, I knew it would be a unique and fun show.

“The cast has absolutely amazed me with their level of preparation, professionalism and talent. I know the cast, as a whole, is extremely proud to be a part of the first production in this beautiful new theater.”

“It’s a little odd having a lot of the people playing multiple characters, including myself, but I feel like it works really well, and everyone brings so much to the characters they play,” he said. “It’s also interesting to see how people react to what’s going on as the characters they’re playing at the moment.”

“The biggest challenge is COVID-19 and keeping them socially distant on the stage while still staging the show,” Davis said. “I spent two hours on the stage (July 30) marking the stage to keep them apart. The staging keeps them 6 feet separate at all times. There are a couple of pass-throughs but when they are sitting and standing, they have to stay 6 feet apart from one another.”