Mark Purvis didn’t think that his son’s fifth grade economics project idea would turn into a reality, but that’s exactly what happened. 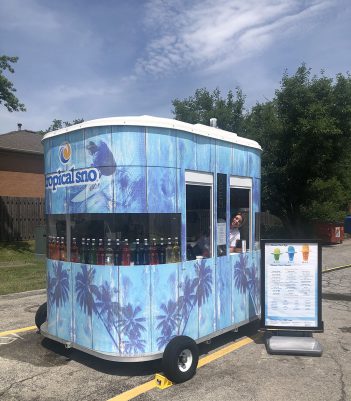 Last summer, Purvis and his son, Cooper, started a shaved ice pop-up stand in their Carmel neighborhood. It was a big hit, so this year the father and son decided to continue the endeavor in a bigger way.

Purvis came across Salt Lake City-based Tropical Sno in the fall of 2019 after doing some research on the idea. Tropical Sno is not a franchise but a company that provides equipment, syrups, cups and materials for those interested in starting a shaved ice shop in their community. After working on their idea for more than a year, Purvis and his son recently set up their stand in a parking lot at the intersection of Carmel Drive and AAA Way.

After receiving approval from the Hamilton County Health Dept., Purvis and his son opened their doors June 12 with operating hours of noon to 10 p.m. Monday through Friday and noon to 9 p.m. Sunday. Purvis said he expects to operate the business annually from the beginning of May through Labor Day.

This is Purvis’ first time to run a business, and he said the 7-by-10-foot shop has done well in its first few weeks of operation.

Purvis has four kids ranging in age from 6 to 12, and he and his wife wanted to start putting money away for college.

“(Tropical Sno) is going to be a neat little summer business that we could involve the kids in when they’re older and then at the same time help pay for the college,” Purvis said.

Tropical Sno offers 28 flavors with three cream options (banana, coconut and vanilla) to add. There are also signature snow cone options created by Purvis himself, one of the best sellers being the “Shark Attack”  that combines tigers blood in the center, blue raspberry around the edges with shark gummies and Sour Patch kids.