The action was in response to myriad national protests demanding policing reform and an end to systemic racism after George Floyd, a 46-year-old Black man, was killed in police custody May 25 in Minneapolis.

According to the executive order, independent credentialing bodies certified by the attorney general must accredit local and state police departments before they can receive funding from the U.S. Dept. of Justice. To become accredited, police departments must ban chokeholds, unless used when deadly force is warranted. The order also states police departments must submit data for collection in a national database that tracks use-of-force incidents.

Frost stated that the department actively works to obtain national accreditation through the Commission on Accreditation for Law Enforcement Agencies. Accreditation is reserved for agencies that comply with national standards.

ZPD recently announced it will establish a use-of-force board to track and review all department incidents involving force. The board will include civilian oversight, something ZPD Chief Michael Spears said is a vital and needed component.

“We constantly evaluate our policies and directives to ensure they reflect the highest ideals and practices of modern law enforcement,” Spears stated. “Members of our department are diligently working to attain national accreditation to ensure we meet and perform our duties consistent with the highest standards. Our work and accomplishments are reported publicly with openness and regularity.”

Spears said the department will include instances when force is used in its monthly report, which he said would be given to public officials and police officers and will be made available to the public on the town’s website. The department also plans to increase its diversity by advertising open positions in areas outside of Zionsville.

Jawan Williams, 25, a Black man from Indianapolis, said the protests and moves toward policing reform are a tangible measure of change and support for racial equality.

Although he doesn’t support Trump for office, Williams said he appreciates “how everything is coming to a change, coming to a brighter future ahead of us,” including Trump’s executive order. But he said more is needed for lasting change and to bring an end to the disproportionate number of Black Americans killed by police.

“In the back of my mind, I’m, of course, a Black man, and every time I get pulled over, I fear for my life because I’m not doing anything wrong,” Williams said.

Of equal importance to Williams are the lives of his Black friends and family, whose lives he also feels are at risk.

“Being a Black man in this world is kind of scary now,” Williams said. “It’s going to take more than laws to change everything. We all have to come together as one to make change happen.”

Cassidy Stewart, 18, of Lebanon, said she supports the protests and policing reform, and she believes chokeholds should be banned and training should be altered. She called for more training of officers, saying she logged 1,500 hours at a cosmetology school to receive accreditation in her field. She said the Indiana Law Enforcement Academy’s basic course for new police officers consists of more than 600 hours of training in a variety of areas, and she believes new officers should be required to complete as many hours, if not more, than she did in her field.

Stewart said all levels of government have not done enough to address racial inequalities.

“They are changing policies, but the policies aren’t what need to be changed,” she said. “They need to get rid of the people in office who are making these policies. We have a long way to go. As a country, we’ve made some steps in the right direction, but not enough.”

Styron stated that the community has an opportunity to learn from recent events.

“(It is time) to start thinking about what we can learn from others and what actions we can take,” Styron stated.  “We recognize the magnitude of work that lies ahead of us as we fight for racial equality, freedom and justice for all. I am grateful for leaders in our town, including Chief Spears, for taking steps toward change and for our community for asking questions and coming together.” 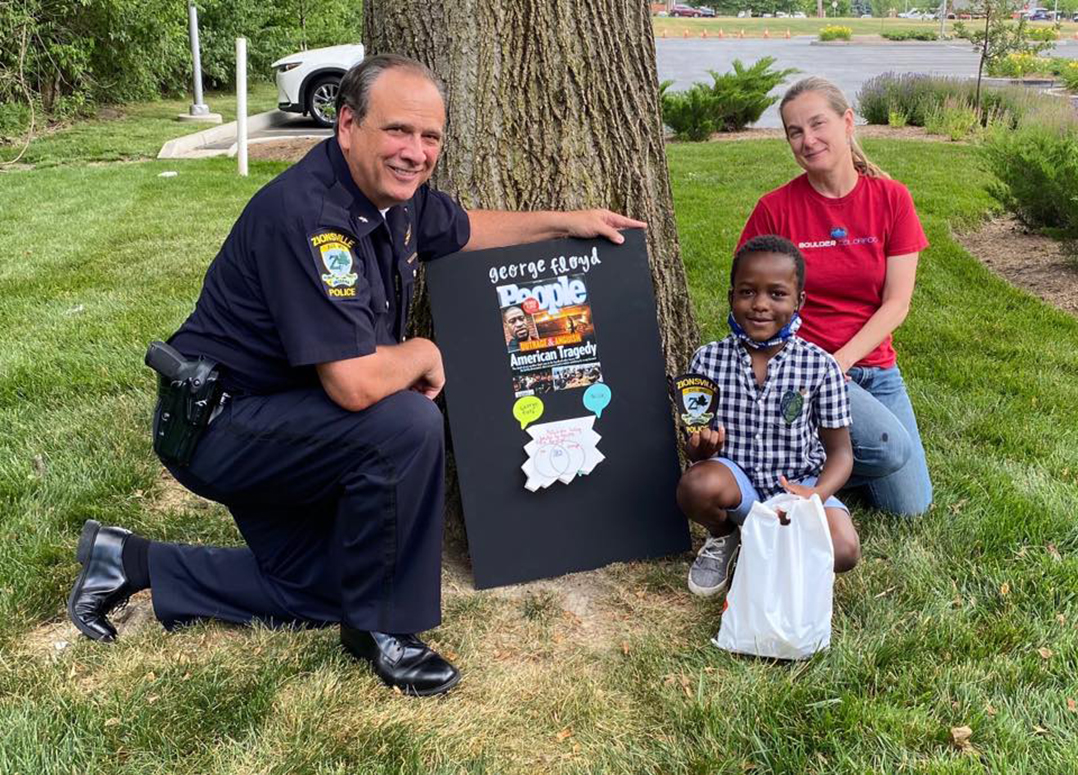 According to 2018 FBI data, no violent crimes in Zionsville were reported to local law enforcement. Violent crimes include burglary, homicide, rape, armed robbery and aggravated assault.

The FBI releases its yearly data analysis almost a full year after the end of a calendar year. Zionsville, with a population of 27,185 residents per census data from 2010, only reported 120 offenses known to law enforcement, most of which were property crimes and larceny/theft.