Fathers and sons have bonded over a love of baseball for generations.

That has certainly been the case for Carmel resident Jim Serger Jr. and his father, who fittingly had a celebratory game of catch at the Field of Dreams movie site to mark a special milestone this year. 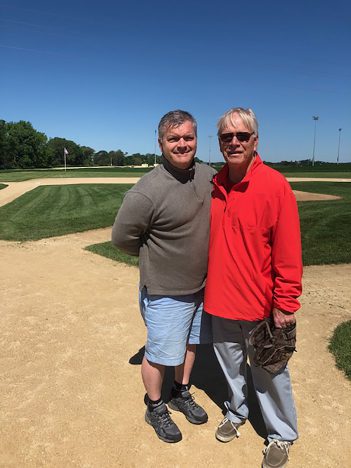 Serger’s father, now 73, got an offer from the Philadelphia Phillies but chose to play baseball at the University of Cincinnati. Serger, 49, played baseball at Archbishop McNicholas High School in Cincinnati. His father coached him on teams through the years.

“Baseball has always been in our blood as a family growing up,” said Serger, whose dad still lives in Cincinnati.

Yet, Serger said his family hid the secret that his father was an alcoholic.

“It wasn’t something you talked about in the late 1970s and early ‘80s. It was swept under the carpet,” he said. “He functioned fine, but he was an alcoholic and we lost that father/son relationship after baseball was done for me.”

Serger said his father eventually admitted he was an alcoholic and sought help.

“Through (Alcoholics Anonymous) and Bill Wilson’s 12 steps, my dad has been 20 years sober,” Serger said. “I was rooting him on the whole time through love and support.”

The two co-authored a book called “Go The Distance” in 2011 about how their relationship was repaired. For the past several years around Father’s Day, Serger said they have celebrated his sobriety and the unconditional love a father and son have for each other.

This year, to celebrate 20 years of sobriety, they made a trip June 11 to Field of Dreams, near Dyersville, Iowa, to celebrate. Field of Dreams was the site of the movie of the same name where a man is troubled about his relationship with his late father. He builds a field in an Iowa cornfield and the fantasy begins.

“We had a great game of catch, hugged and had high fives,” Serger said. “A couple of tears were shed but those are positive tears.”

The trips are about much more than games or sightseeing.

“Baseball always seemed to be the way that we could break the ice,” Serger said. “The radio is never on during the trips. We talk about sports, work, my mom, my wife, my kid. The most special time I have with my dad is doing the 24- to 48- to 72-hour trips. We talk about how much we love each other and how proud we are of each other.”

Drawing on the movie’s line ,“If you build it, he will come,” Serger said, “If you continue to build a relationship stronger, it’s going to be stronger.”

That’s what the Sergers have done through communication.