Cara Nowlin was familiar with how important the Songbook Academy is.

Nowlin, who will be a Carmel High School senior in August, has been going to watch the Songbook master classes and final performances since she was in seventh grade.

“I’ve always looked up to the performers and thought they were incredibly gifted, but I never saw myself being accepted into a group of such talented people,” Nowlin said. “I was actually in a vocal lesson on FaceTime with my teacher when my parents came running to deliver the news. My dad is the one who saw the email. He was on a work call and left to tell my mom and me. I was so excited when I heard I was selected for the Songbook Academy.

“I could not be more excited to make new friends from around the country, work with such wonderful people and grow in what I love to do most.”

Nowlin, a member of the school’s all-female show choir Accents, will be joined by Emily Chrzanowski, who also will be a CHS senior. They are two of 40 students selected nationally for the program, set for July 12 to 18. The intensive for young singers is typically held at the Center for the Performing Arts in Carmel, but it will be held virtually this year. 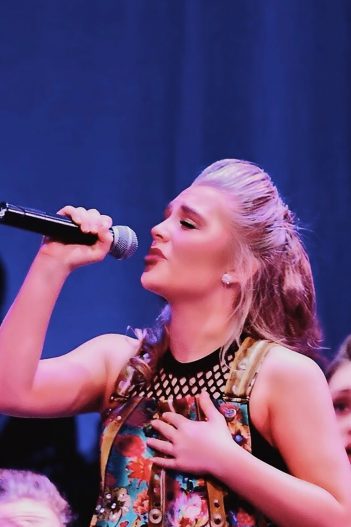 “I’ve had friends who have been accepted within the past few years, so I’ve been able to ask them questions, which is amazing and really helpful,” Nowlin said.

Nowlin said the Great American Songbook is one of her favorite genres of music.

Chrzanowski said the Great American Songbook has always been one of her favorite genres.

“From dancing and singing around the house with my grandma to the works of Etta James, to singing along with Bing Crosby in ‘White Christmas,’ I have always found this genre absolutely mesmerizing,” she said.

Chrzanowski said she was surprised to be chosen because it is an extremely competitive program.

“I am honored to have the opportunity to work with such an accomplished organization,” she said. “I was so happy that I was going to be able to take part in this amazing experience. I have friends who have worked with the Songbook Academy in the past and they said it was the best week of their lives. So when I heard I got in, I couldn’t help but feel excited for this new opportunity.”

Despite the virtual classes, Chrzanowski said she is confident she will gain the same amount of knowledge from the accomplished instructors as she would have had if it was in-person.

“It is clear that their goal is to share as much about this wonderful genre as they can,” said Chrzanowski, who plans to pursue musical theater in college.

Chrzanowski concentrates on musicals theater performances and was in “Newsies” at Civic Theatre in 2019.

“Performing has always been my passion,” Chrzanowski said. “From the first time I got on a stage, I have always felt my happiest when performing.”

The week will conclude July 18 with an all-day performance showcase hosted by Feinstein and streamed online for families, friends and the public. For a schedule of events, visit TheSongbook.org/SongbookAcademyOnline.