You are at:Home»Current in Carmel»Carmel Cover Stories»City reveals details, incentives for Lot One, The Corner developments

The City of Carmel is considering more than $27 million in bonds for four redevelopment projects.

The bonds will be repaid through tax increment financing, which uses the increase in tax revenue generated by a development to pay for the improvements. The bonds will be backed by developers, meaning developers will be responsible for covering payments if TIF revenue falls short.

The Carmel City Council reviewed the projects at its May 18 virtual meeting. All projects were sent to the council’s Land Use and Special Studies committee for further discussion. A committee meeting date has not been set.

The following is an overview of the projects.

The council is considering $6.5 million on bonds for Lot One, a mixed-use development planned on 1.8 acres on the northeast corner of Range Line Road and Main Street. Carmel-based developer Lauth is spending nearly $40 million on the three-story project, which is proposed to include nearly 60,000 square feet of office space, four condos and 70 apartments wrapping around a 325-space parking garage.

“The garage will literally be almost invisible to pedestrians and vehicle traffic going up and down Range Line and Main Street,” said Michael Garvey, Lauth chief investment officer.

The development will also include a small park near the existing Rotary clock and public space between the garage and office building.

Lauth is also developing — and moving its headquarters to — The Proscenium’s Agora building at Range Line Road and Carmel Drive, which is set to open this year. Garvey said the success of that project, which is 70 percent leased, will help drive tenants to Lot One.

Construction is expected to begin in early 2021. 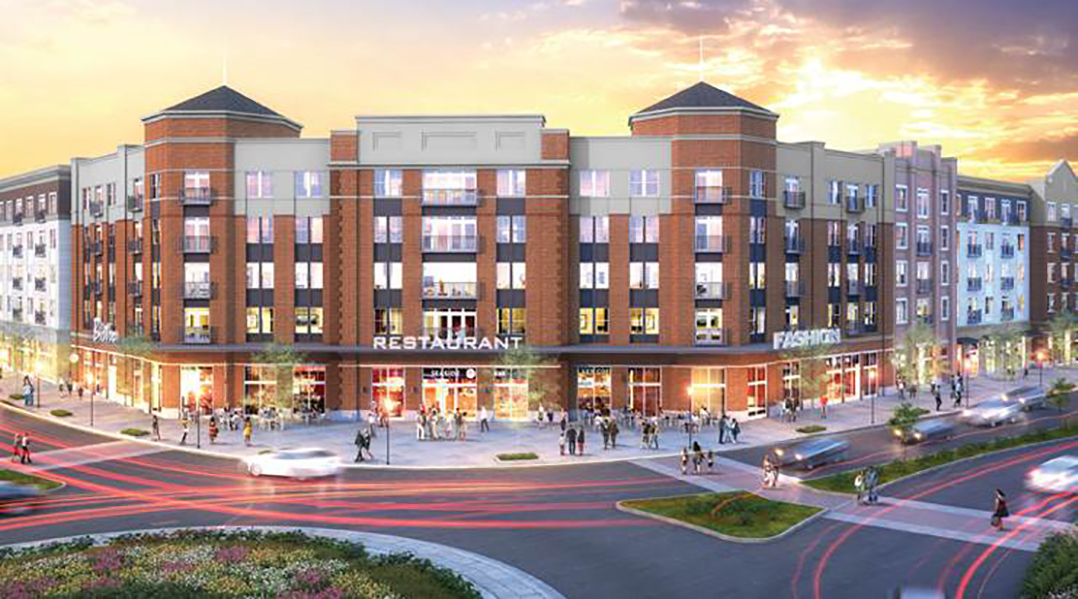 The council is considering $14 million in bonds for The Corner, a mixed-use development on the southwest corner of 116th Street and Range Line Road.

Kite Realty is planning a mixed-use development on the 4.6-acre site that will include nearly 25,000-square-feet of retail, 278 apartments and a parking garage. The largest building is proposed to have retail on the first floor and 149 units on four additional floors. The other building would have four stories and 129 apartments.

“We want this to be something that when it goes up people will say, ‘Wow, what an amazing difference. What an amazing gateway to the Carmel central core,’” Kite President Thomas McGowan said.

The site was previously home to a shopping center built in the 1970s and a bank building, all of which were demolished in January 2018. McGowan said the project has taken much longer than anticipated as developers ran into floodplain issues and had to negotiate buyouts.

Construction on the $70 million project is expected to begin in early 2021 and be complete by early 2023.

The council is considering $2.5 million in bonds for renovations to Brookshire Village Shoppes at the southwest corner of 126th Street and Gray Road.

Developer KennMar bought the aging shopping center for $6.4 million in 2019 and announced in January that Needler’s Fresh Market would become its new anchor. Grocer O’Malia Food Market anchored the site until it went out of business in 2017.

Planned upgrades include an updated facade and enhanced entrance features. Kennmar President and CEO Brent Benge said the improvements will do more than provide a fresh look.

“Grocers have been struggling for many reasons. Margins have been compressed quite a bit. Those economics flow through to the developer and we are not able to collect as much rental income as we normally would from some other types of uses,” he said. “That limits us on what we can invest in the project for a grocer, however incentives allow us to reinvest not only in the outside facade but also the inside through tenant improvements the grocer needs to open up.”

“The use of TIF here really propels us into the 21st century and allows Needler’s to compete with surrounding grocers,” Mestetsky said. “The plaza today is not in very good shape. Maybe (shoppers) want to drive north to something outside of Carmel to something a bit more shiny. We want to put our east side on equal footing with those competitors outside of Carmel, and having a nice space is step one.”

Indianapolis-based Onxy+East is planning to build 12 condos and 45 brownstones on 2.6 acres along the Monon Greenway just south of Civic Square. The site is currently a parking lot near the Carmel Fire Dept. headquarters.

The council is considering $3.7 million in bonds for the 2.6-acre development, which will be known as Melangé. It will bring the first new home ownership opportunities to the area in more than 10 years.

David Leazenby, Onyx+East vice president of acquisitions, said the company has been working on the $29 million project for three years. He said it is a missing element in a part of town that has shopping, government centers, performing arts venues and the Monon Greenway.

“Adding for-sale housing is the final piece of the puzzle that makes it a complete neighborhood,” he said.

The 2,100 to 2,600-square-foot brownstones will be four stories tall with rooftop decks, three or four bedrooms, bay windows and private two-car garages. Prices are expected to begin in the high $400,000s.

The 1,600 to 1,900-square-foot condos will feature single-level living and include a private two-car garage. Prices are expected to begin in the low $400,000s.

A passageway between two of the buildings will provide access from the Monon Trail to a small common area with a fountain and benches that will be open to the public.

Melangé is expected to break ground in the fall with the first units ready by summer 2021.