You are at:Home»Current in Carmel»Carmel Community»3rd neighborhood proposed in 3 years at 136th St., Keystone

Epcon Communities is hoping the third time’s a charm for a parcel of land on the northeast corner of 136th Street and Keystone Parkway. 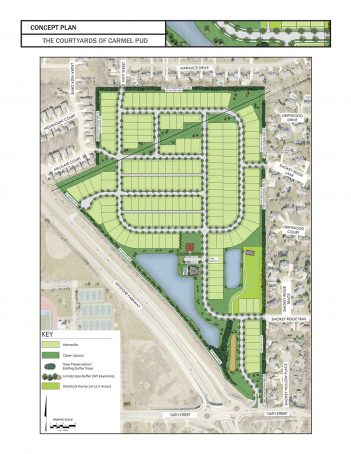 A 169-home neighborhood is proposed on the northeast corner of 136th Street and Keystone Parkway. (Submitted image)

The Ohio-based developer is proposing a 169-home age-restricted neighborhood on a 59 acre site that has seen proposals from two other developers in the last three years. Beazer Homes withdrew a proposal it submitted in 2017, and after receiving city approval in March 2019 Old Town Companies decided not to pursue the project.

The Carmel Plan Commission discussed the site’s newest proposal, The Courtyards of Carmel, at its May 19 virtual meeting. Epcon is proposing single-story homes for people age 55 and older who are looking to downsize. The homes are expected to range from $375,000 to $575,000 with an average of $475,000. If the project is approved, construction is expected to begin in the spring of 2021.

Steve Hardin, an attorney speaking on behalf of Epcon, said developers attempted to replicate much of Old Town’s approved planned unit development, such as the amount of open space and preserving a historic home on the property. Differences include the age restriction and only building single-family homes on the site. Old Town’s plan included single-family homes and townhomes.

“We spent all this time coming up with the plan and engineering telling us it would be best to connect into the roundabout and do a bypass coming north on Keystone going east on 136th, and that all seems to have been scrapped,” Rider said, asking for more information when the project is discussed at the residential committee meeting.

The commission received dozens of letters from the public regarding the project, with many expressing concerns about density, increased traffic in an already congested area and design of the homes.

Hardin said the project’s density is 2.88 units per acre, only slightly higher than Old Town’s 2.81 units per acre. The city’s comprehensive plan calls for density between 1.4 and 4 units per acre on the site.

Commissioner Carrie Holle, who lives near the proposed site, said she believes the project’s density is a problem.

“The layout is not appealing. It looks very cookie-cutter to me,” she said. “The plan commission all these years has done a very good job preserving the aesthetic of Carmel in the new neighborhoods it approves. I wouldn’t be able to look at this and say I’m proud of this project. I think if we reduce some of the density we would have something to work with.”

She and other commissioners took issue with the calculation of green space, saying they didn’t believe space surrounding the historic home should be counted, as it will be private property.

Current has reached out to Old Town Design Group for comment.

The project is Epcon’s first foray in Indiana, although a franchisee is building Epcon homes in a Zionsville development known as The Courtyards of Zionsville.

The commission’s residential committee will review the project before sending it back to the full plan commission for a final vote. A committee meeting date has not been set.