For filmmaker Katherine Crump, her short film has a deep personal connection.

“’Telling the Bees’ is inspired by the loss of my lifelong friend who passed away in December of 2018,” said Crump, a Geist resident who wrote and is directing the 20-minute film. “We knew each other for 15 years, grew up together, we were Girl Scouts together and moved to Bloomington to attend Indiana University together, and losing her so suddenly was a major adjustment for me and everyone who knew her. The movie focuses on both the mourning process as well as many nostalgic, joyful memories that we shared, and ultimately portrays the nonlinear, muddled nature of grief by intercutting those two timelines. 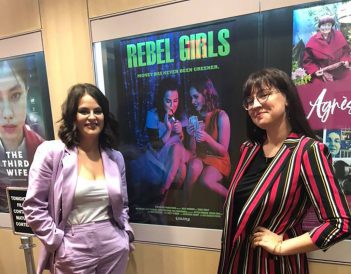 Riley Dismore, right, and Katherine Crump are the producing partners on “Telling the Bees.” (Submitted photo)

“We’re honoring the memory of a friend, but the more people I talk to about it the more I realize we’re also commiserating in a common experience of grief and loss.”

Crump said the story is a fictionalized version of the grief she experienced.

The title comes from the custom of beekeepers telling the bees major events in their lives.

Like all productions, the schedule of “Telling the Bees” has been disrupted by the coronavirus pandemic.

“The necessary need for quarantine has affected our schedule because we were meant to be shooting this month (May) but are obviously needing to create a new plan,” said Crump, a 2014 Hamilton Southeastern High School graduate. “We are still uncertain as to when that new schedule will take place, but we’re still moving forward, doing the work and making plans from home as well as we can.”

Crump said she hopes to film in late summer or fall depending on actors’ schedules.

“Telling the Bees” is the third short film under the umbrella of the production company, Film Wives Productions. Crump’s producing partner is Riley Dismore, a Geist resident and Fishers High School graduate. Dismore and Crump met at Indiana University.

Geist resident Amy Pauszek, whose Where’s Amy photo column runs in Current newspapers, is a producer on the film.

Pauszek is the executive producer for “The Addict’s Wake,” which focuses on the opioid epidemic in Brown County. Zionsville resident Michael Husain is the director of the full-length documentary.

“The pandemic has made production for our feature documentary film more challenging, but it is also important that we gather material during the crisis,” Pauszek said. “The forced isolation is very difficult for those seeking recovery. We have continued to film during the pandemic because being isolated and no work for addicts makes it extremely difficult for them to stay clean, sober and healthy.

“There are more overdoses, and COVID-19 has added more stress and disruption to Brown County.”

Pauszek said they are conducting online interviews via Zoom and similar software to update with those featured in the documentary.

“We will continue fundraising avenues to get the film done because this film is not only educational for addicts and their families left behind to pick up the pieces of the wake, but we want to leave the audience with a solution and hope,” Pauszek said.

Westfield resident Cort Howell’s film, inspired by “The Andy Griffith Show,” was originally scheduled to begin principal photography May 15-17 during the “Mayberry in the Midwest” festival in Danville, but the festival has been canceled because of the pandemic.

The production schedule has been consolidated, as a portion of the movie was already scheduled to be filmed in September to coincide with the “Mayberry Days” festival in Mount Airy, N.C., Griffith’s hometown. The schedule calls for two weeks in Indiana and one week in North Carolina and Virginia, followed by two days in Los Angeles.

Howell and other producers are working with representatives from the Town of Danville to secure locations for the new dates.

To participate as a sponsor and learn more about product placement opportunities in the film, business owners may contact the producers at sponsor@mayberryman.com.

“We believe participation in a feel-good project like ‘Mayberry Man’ will generate valuable free publicity and goodwill for our sponsor-partners, especially as our nation emerges from this crisis,” Howell stated in a press release.

Cort Howell, who is the producer, and writer/director Stark Howell are the sons of Hoke Howell, who played “Dud Wash” in TV series.