You are at:Home»Current in Carmel»Carmel Community»Carmel runner carries flag to inspire after first marathon canceled

Justin Linder was training for his first marathon when the coronavirus pandemic changed everyone’s world.

The Carmel resident ran his first half-marathon in September 2019 and was preparing for the Carmel Marathon, originally set for April 4. 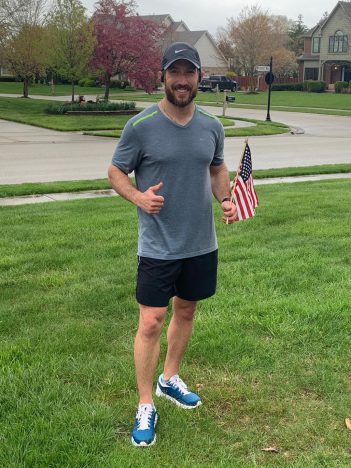 Justin Linder frequently runs with a flag during the stay-at-home order. (Submitted photo)

“After it got postponed (to June 14), I decided I’m not going to stop the training,” he said. “When we all went to a work-from-home environment, I grabbed an American flag on one of my training runs and ran out. I had no less than 15 people honk and wave, people giving thumbs-up. I’ve ran with it several times since then.”

Linder, who works in the financial services industry, has run 211 miles with the flag and more than 681 miles overall as of April 28. With his wife, Carrie, due to deliver their third child May 28, Linder plans to run the Carmel Marathon virtually May 23. The couple has a son, Rylan, 7, and a daughter, Brooklyn, 2.

Linder, 35, shares his experience running with the flag on his Facebook page.

“I’m trying to break up some of the adverse conversations that are going on in social media and break up the monotony of the work-at-home environment,” said Linder, a University of Indianapolis tennis player from 2002 to 2006. “I’m trying to create some smiles. I have no shortage of dad joke-type humor that I put out there with the possibility of spreading positivity for people to read.”

He hopes running with a flag lifts the spirits of those who see him.

“It’s kind of a remembrance of we’re all in this together. We’ve been through a lot as a country,” Linder said. “I’m just trying to give people a little hope.”

“I’m trying to thank people who have been impactful to me in my life and other people impactful during our current environment,” Linder said.