At least 10 people in a Carmel nursing home have died since April 1, with at least three of them confirmed to have had COVID-19 and others not tested but suspected by their families to have had it.

The deaths have left many of their relatives looking for answers and wondering if Carmel Health & Living Community on Medical Drive has become a hotspot in Hamilton County for the disease.

CHL declined to provide information on how many people have been infected or died from the disease but said it has called in a strike team and is working closely with the Indiana State Dept. of Health to manage the situation.

“As a family-centered organization, we value the lives and safety of our residents and associates,” CHL Administrator Tammy Bledsoe stated. “In this spirit, we mourn with those families that have lost loved ones to COVID-19 and we continue to take aggressive measures to manage the impact of this virus in our Carmel Health and Living community.”

But not everyone believes that is the case.

Carri Sinnis will never forget the last time she saw her father-in-law on a video call.

A Greek immigrant who moved his family to the U.S. in 1972, Loukas Sinnis, 85, had been living at CHL since September 2019. He was known for his friendliness and surprising the nurses with an icy glass of punch he would pour from the complimentary pitcher in the lobby.

Loukas had seemed well the last time Carri visited with him in early March, shortly before the facility stopped allowing visitors in an effort to prevent the spread of COVID-19, but soon he began to complain of a fever, trouble breathing and extreme weakness.

On March 26 the CHL nurses set up a video chat with his family – who checked in daily for updates on his health – in hopes that it would cheer him up.

“He looked like death,” Carri said. “My husband and I looked at each other like, ‘Oh my God.’ I have chills now because I can’t get that out of my eyes.”

Less than two weeks later, Loukas died. He tested positive for COVID-19 during a brief hospital stay before heading back to CHL to live out his final day in hospice, alone.

The news got worse for Carri. On April 15, she learned that her mother-in-law, who lives in a separate wing in the facility from where Loukas lived, had a fever. By April 18, her COVID-19 diagnosis was confirmed as well. Carri is visiting with her frequently by video and is prepared to have her sent to the hospital if she starts to look as ill as her late husband did.

But she worries for the CHL residents that don’t have family nearby.

“I love every single resident there,” Carri said. “There are so many people who have nobody to speak for them.”

Hamilton County Health Dept. records show that at least nine CHL residents have died since April 1 in addition to Loukas. All deaths occurred between April 2 and 10.

County records don’t show any deaths at the facility in March. No other county long-term care facility had more than two deaths reported so far in April as of press time.

Of the 10 deaths in April at least three were confirmed to have COVID-19, although family members of the deceased believe several other residents had it as well but likely were not tested. Only two families successfully contacted by Current said they didn’t believe their loved one had COVID-19.

Several people who have or had family members at CHL said the administration has not been forthcoming, either declining to provide information about positive diagnoses or being dishonest about them.

“COVID-19 is going to happen (in nursing homes), but you have to take responsibility and let everybody know what’s going on,” Carri said. “They weren’t doing that.”

CHL, which is operated by CarDon & Associates, is required to report COVID-19 cases to the Indiana State Dept. of Health, which releases cumulative totals from nursing homes across the state. State officials declined to provide a breakdown of cases by facility.

“We are sharing all information on cases with (the Indiana State Dept. of Health) and with our residents, their loved ones and our caregivers,” Bledsoe stated.

CHL officials said after the first positive case of COVID-19 every resident’s responsible party was notified by phone about the diagnosis. They said they are only authorized to communicate with residents and their designated responsible party.

But Carri and many others said they never received notification of a positive COVID-19 diagnosis. Carri said she asked CHL to alert other families about her father-in-law’s positive diagnosis, but she said none of the families she is in contact with regularly said they heard news of the diagnosis from CHL. And she said she never received notification that any other residents had tested positive, even though her mother-in-law still lives there. 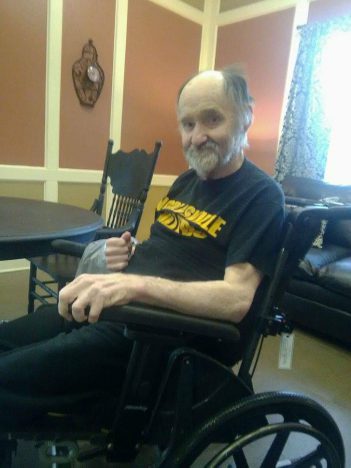 Answers have also been difficult to find for the family of Robert Duckworth, who died at CHL on April 6 at 74 from cardiopulmonary arrest and pneumonia, according to his death certificate.

Jennifer Pack, Duckworth’s niece who lives in Florida, said she received a call from a CHL nurse April 6 saying he had “all the symptoms” and was presumed to have COVID-19, although he wasn’t tested.

Later that day, the family learned that Duckworth succumbed to the disease. When Pack called CHL for more information – which she said took several attempts before someone picked up the phone – another nurse told her she already knew too much.

“We never got an answer on the COVID,” Pack said. “The nurse that (initially) told us all that information was never supposed to tell us that.”

Pack described her uncle as a huge A.J. Foyt fan who had a lot of friends. She said he had a lifelong speaking disability and didn’t have much education but enjoyed his job repairing cars at Glendale Body Shop. He suffered a stroke before going to live at CHL.

“He had a rough life, but he was such a good person,” Pack said. “He’d do anything for anybody.”

Irma Neif, whose father-in-law, Alexander Neif, died April 2 at 95 of cardiopulmonary arrest and pneumonia, according to his death certificate, also found her questions unanswered.

Irma said Alexander had symptoms of COVID-19, but he was never tested for it.

“The first thing I asked is if there were other cases, and they didn’t tell me,” Irma said.

Not required to notify – yet

Long-term care facilities are not required by law to alert the families or designated representative of all residents when there is a positive COVID-19 diagnosis, but they are encouraged to do so, according to Zachary Cattell, president of the Indiana Center for Assisted Living.

“The current guidance is when any COVID-19 case is confirmed in the building that all residents and their designated authorized representative be notified,” Cattell said. “Beyond that, when there’s another case or a death, a similar notification should take place.”

That could soon change, however, as the Centers for Medicare and Medicaid Services on April 19 announced it will soon require facilities to notify residents and their representatives of a confirmed COVID-19 case or onset of respiratory illness among other residents or staff.

Cattell said that most nursing homes in Indiana are following the guidance on notifying residents and their designated representatives.

“Long-term care professionals are doing extraordinary work on a daily basis. However, focus on just the small number of communication lapses stokes fear and uncertainty about the care being provided in our centers, which is counterproductive to the work we’re doing and the communication we’ve had with families,” he stated. “It also creates anxiety for our residents.”

George Stergiopoulos blames the pandemic for his father’s death as well – although he doesn’t believe COVID-19 is what killed him.

Elias Stergiopoulos, 88, a Carmel Health & Living resident and Loukas Sinnis’ best friend in the facility, died April 7 – the same day as Loukas – from what his death certificate lists as pneumonia and sepsis. Elias’ COVID-19 test came back negative, but George believes the facility lockdown that kept his family out of the building was a significant contributing factor in his father’s death.

“When family was in there taking care of him as our own, we saw that we were doing the work for everybody in there. It’s a very incompetent facility,” he said. “When they finally locked us out by state law – which I think was an awful mistake – the care diminished. The man was in pain and suffering, and all they did was medicate him.”

Stergiopoulos said he watched his father decline through video chats, powerless to provide comfort or help.

“I feel they neglected the man and they were definitely contributors to his demise,” he said. “I feel that 100 percent.”

CHL officials declined to address Stergiopoulos’ specific situation but said the decision to close the facility to guests came as a result of a presidential mandate.

“We understand this is a difficult time for everyone – for our residents, their families and our caregivers,” CHL Administrator Tammy Bledsoe stated. “We understand and empathize with the important role family members play in the lives of seniors. We’ve made it our mission to find creative ways to keep families involved and have encouraged our families to do so.” 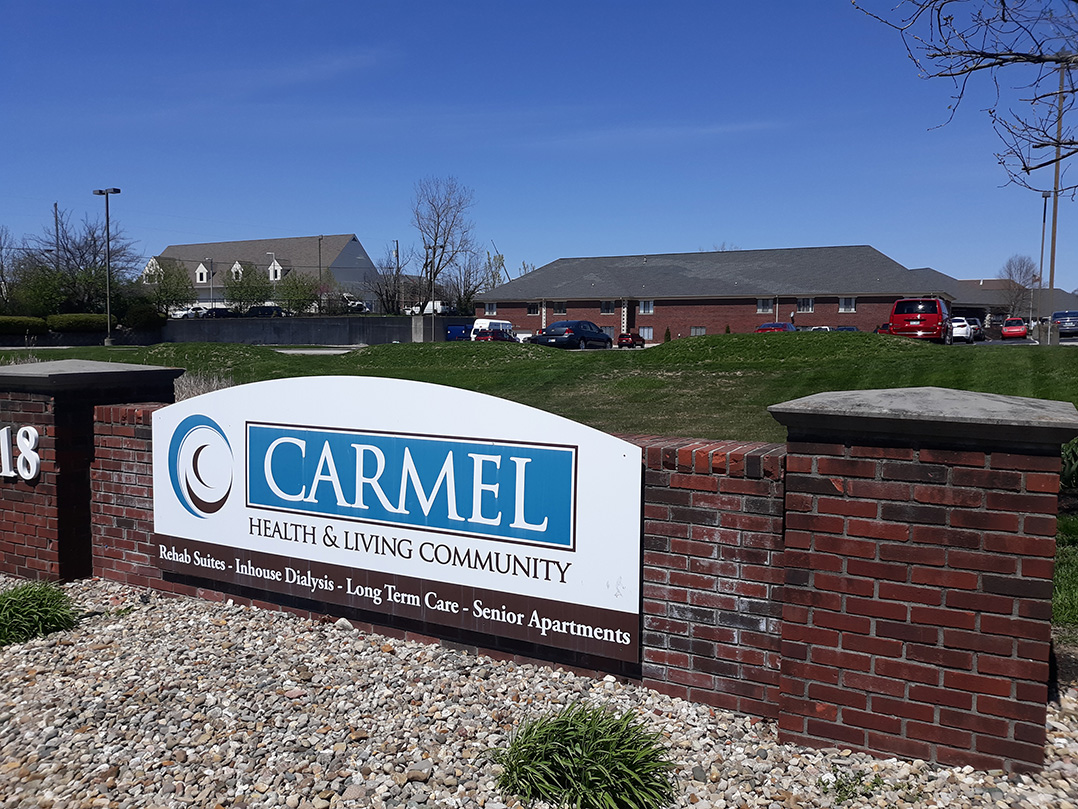 Several residents at Carmel Health & Living have received a COVID-19 diagnosis. At least 10 people living at the facility have died since April 1. (Photo by Ann Marie Shambaugh)

The following is the full statement from Tammy Bledsoe, administrator at Carmel Health & Living:

“As a family-centered organization, we value the lives and safety of our residents. In this spirit, we mourn with those families that have lost loved ones to COVID-19 and we continue to take aggressive measures to manage the impact of this virus in our Carmel Health and Living (CHL) community.

Our COVID-19 preparedness and response plans were created under guidance from The Centers for Disease Control (CDC), Centers for Medicare and Medicaid Services (CMS) and the Indiana State Department of Health (ISDH). We have followed their infectious disease control protocols and per ISDH and the Strike Team guidelines, we are testing residents at CHL who show signs or symptoms of COVID-19. Following any positive test, we care for the resident in isolation and remain in close contact with their family members.

In addition, the health and safety of our heroic associates is a top priority and we screen them daily for fever and any other signs or symptoms of respiratory illness. We have ample personal protective equipment (PPE) and our associates wear N95 masks at all times while working. We have also given our associates masks to wear when they are away from work. Any associate who tests positive for COVID-19 must follow ISDH guidelines for returning to work.

We have been regularly and transparently sharing information regarding cases with ISDH and with our residents, their loved ones and our caregivers. Earlier this month, we notified everyone when the first case of COVID-19 was confirmed in our community. At that time, we opened dedicated phone and email channels for this issue and have been in regular contact with families to answer their questions and provide regular updates on the health and well-being of their loved ones. Those lines of communications will remain open as we work through this difficult time together.

These are challenging times and our entire team remains committed to the health and safety of our residents, their families and our associates.”