In response to public health advisories due to the coronavirus pandemic, acclaimed pop songwriter and producer David Foster is rescheduling his planned May 2 appearance at the Center for the Performing Arts.

The performance, titled “An Intimate Evening with David Foster: Hitman Tour Featuring Special Guest Katharine McPhee,” has been moved to 8 p.m.  Jan. 21, 2021, at the Palladium, 1 Center Green, Carmel. Tickets starting at $35 are available now at thecenterpresents.org or Tickets@thecenterpresents.org. Ticket holders unable to attend the new date are eligible for a full refund. 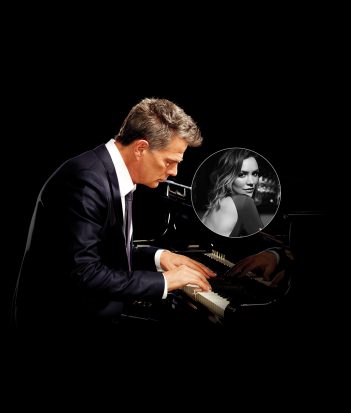 Foster promises a musical extravaganza with a powerhouse band performing songs he has written or produced, including Celine Dion’s “Because You Loved Me,” Earth Wind and Fire’s “After The Love Is Gone,” Chicago’s “You’re the Inspiration,” Josh Groban’s “You Raised Me Up,” Michael Bublé’s “Home,” Natalie Cole’s “Unforgettable” and many more. The performance also includes anecdotes from Foster about the songs, artists and key moments of his life.

Joining the 16-time Grammy Award winner for a number of songs will be Katharine McPhee, his wife, who rose to fame on American Idol and went on to success as a recording artist and actress, with roles on film, television (“Smash,” “Scorpion,” and “Community”) and the stage, most notably on Broadway and London’s West End in the hit musical “Waitress.”

In addition, author and humorist David Sedaris’ planned April 21 appearance has been rescheduled. “An Evening with David Sedaris,” featuring all-new stories, an audience Q&A and a book signing, is now set for 7:30 p.m. Dec. 3, at the Palladium. Tickets starting at $45 are available now at thecenterpresents.org. Ticket holders unable to attend the new date are eligible for a full refund.