Dr. Debra Rusk worked in emergency medicine until 2017, when lung disease progressed to the point where she required a bilateral lung transplant.

A Fishers resident, Rusk had the transplant at Methodist Hospital in February 2017, but she was unable to return to emergency medicine because the exposure risk was too high.

So, Rusk became an on-track medical responder for IndyCar and began focusing on her fitness.

“Right after the transplant, you go through a really intensive outpatient rehabilitation program at Methodist, and exercise is so important,” Rusk said. “Well, (it is) for everybody, but especially after a lung transplant. You have to be careful and diligent about maintaining your exercise program and all.”

When she finished her outpatient intensive rehab program, Rusk began exercising on her own.

“I tried doing stuff at independent gyms and found out I wasn’t really going as much as I should have been,” she said. “It’s hard for most of us to push ourselves when it’s just us telling us what to do, so a friend of mine encouraged me to try Orangetheory (fitness facility), so I took advantage of it to try a class for free. 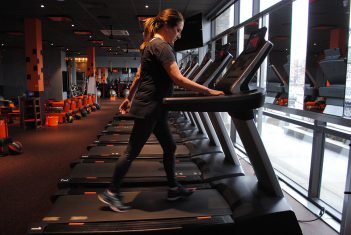 When she found a program that worked for her, Rusk’s lung function continued to improve.

“I am doing are far better than what I was trying to do on my own,” she said.

“I’ve never been able to run before. I can tell such a difference in my own fitness level because of what I’m doing,” Rusk said. “I see my transplant team about every three months, and my pulmonary functions have continued to improve. Most people plateau at some point in the first few years, but I’m coming up on Year 3 (this month) and my functions are continuing to improve.”

As a result, Rusk now participates in a part of emergency medicine outside of the hospital setting.

“I started working in the infield care center at the (Indianapolis Motor Speedway), and then in 2009, I started traveling with the IndyCar team as one of the physicians on the track who responds to drivers if they have an accident,” Rusk said. “I missed the 2017 season because of the transplant, but that’s the only season I’ve missed. I can still do IndyCar (emergency medicine) because the drivers aren’t sick. 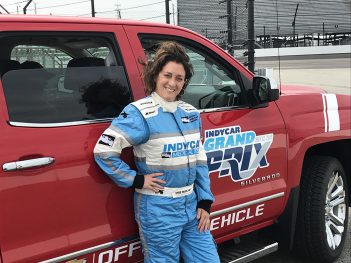 “If there’s an incident, they are trauma and not illness. Because the drivers are healthy but injured, I can work on them.”

Although it’s not the same type of medicine Rusk would practice if she were able to in a hospital emergency room, it is a niche practice.

“I am able to treat the drivers because I have the skillset still for emergency medicine, but the only reason I am allowed to treat them is because they are injured and not ill,” Rusk said. “The only scope of emergency medicine I could do safely is probably trauma in a general setting, but nobody will hire you just to do trauma.

“It is a way for me to use my emergency medicine skillset in an environment that doesn’t put me at risk.”

Dr. Debra Rusk, an emergency medicine physician, received a bilateral lung transplant in February 2017 and encourages people to sign up as an organ donor.

For more or to register as a donor, visit donatelifeindiana.org/donor-registration.