You are at:Home»Current in Carmel»Carmel Community»Carmel teacher: ‘A tremendous honor’ to attend Super Bowl

Mike Bostic had the time of his life, thanks to Indianapolis Colts owner Jim Irsay.

The Westfield resident was nominated in Irsay’s Twitter contest and chosen for his loyalty as a super fan and season ticket holder.

“He picked me. It was an incredible experience,” Bostic said. “It was a tremendous honor.” 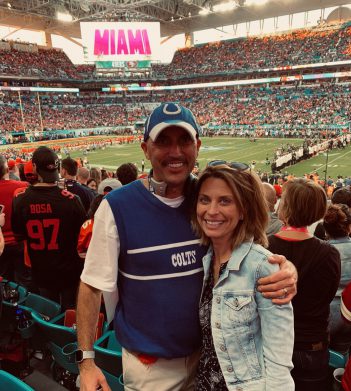 A physical education teacher at Carmel’s Forest Dale Elementary School and a Carmel Clay Schools bus driver, Bostic received two tickets to the Feb. 2 Super Bowl and $4,000 to use for flights, hotel, meals and other expenses. He also received $1,000 for a charity of his choice. He gave the funds to Marlin Jackson’s Fight for Life Foundation.

Brett Crabtree, a Fishers resident, won the same prize package from Irsay after being nominated as a Colts fan who is active with charity events. He donated his $1,000 to Riley Hospital for Children.

Bostic, who often dresses up as Tony Dungy because of a resemblance, calls himself Clony Dungy on Twitter. He has been a season ticket holder for six years.

Bostic and Crabtree did an Indianapolis TV interview with Crabtree dressed as Peyton Manning.

Bostic wore his Dungy attire at the Super Bowl and rooted for the Kansas City Chiefs, who beat the San Francisco 49ers.

“I was in a sea of red, so the blue sweater vest stood out,” said Bostic, who attended with his wife, Gina. “The seats were fantastic. It was nice to enjoy the game and not ride the emotional ups and downs like the Chiefs and 49ers fans. The best part was sharing it with my wife. That I got to enjoy the whole thing with her is priceless.

“There is no way I can adequately capture what it meant to represent the team I love at a place where we won the Super Bowl 13 years later. I can say for the rest of my life I went to a Super Bowl.”

“We did the free fan experience at Bayside, which was phenomenal,” Bostic said. “We listened to Deion Sanders, Terry Bradshaw and Drew Brees.”

Bostic said his kids kept texting him that they could see him on the Fox pregame show.

“Michael Strahan came over and got a picture and so did Jimmy Johnson,” Bostic said. “It was really cool.”