You are at:Home»Current in Carmel»Carmel Community»Carmel native among 3 students selected to visit Saudi Arabia

Samuel Knapp said it was one of the most professionally handled tours he has ever experienced. 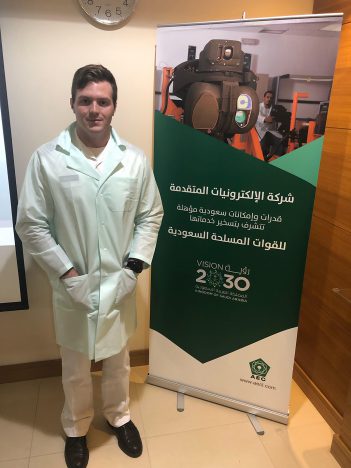 Knapp, born and raised in Carmel, was one of three cadets selected from the Virginia Military Institute to travel to Saudi Arabia with the National Council on U.S.-Arab Relations, a nonprofit dedicated to sharing knowledge of the Arab world and building strong relationships between the two nations through regular meetings and educational trips.

Knapp toured Saudi Aramco, the company that owns all oil fields; Advanced Electronics Co., a group that specializes in creating Saudi versions of foreign technology; and the Ideological Warfare Center, an organization that investigates how terrorists gain footholds in the community. He also visited the headquarters of every military branch.

“The main point was to introduce young future military officers to the institutions and the people that they’re going to need to utilize to ensure that the bonds between Americans and Saudis stay strong in the future,” he said.

Knapp has studied in France and England, but he said the Saudi experience was completely different.

Knapp is on pace to graduate from VMI in May with a degree in international studies and political science. After completing the Infantry Basic Officer Leadership Course and Ranger School in Fort Benning, Ga., he will become a commissioned officer in the 29th Infantry Division in Virginia.