You are at:Home»Current in Noblesville»Noblesville Cover Stories»‘Same as U’: Woman opens school for young adults with developmental disabilities

As her daughter progressed through the public school system, Jennifer Sell became increasingly concerned about what would happen after she graduated.

Sell’s daughter, Jessica, has Down syndrome, and although the Noblesville Schools system provided support, Sell wasn’t sure what was available for her daughter after high school.

That’s when she took matters into her own hands by creating the nonprofit Same as U, which serves young adults with developmental disabilities.

“I’ve always watched parents ahead of me to see how they navigate through junior high school and how you navigate through this, and I started watching people leave the high school and how different their lives looked,” said Sell, Noblesville resident. “What I learned is from the time they are 3, people with disabilities will enter the school system, and what was designed to educate them, it’s put in place for education, but it provides this platform of amazing social opportunities with peers. Within the school system, they can participate in sports and clubs and all these things, and all of that comes to an abrupt stop when they exit school, and then their peers are going off to college or joining the military – things typically that have not been options for this population.

“It’s described to me as you’re coming to an edge of a cliff and everything’s been so planned up until this point, and it’s like, what happened?”

Sell and her family began to visit places to figure out a plan for Jessica but couldn’t picture her family fitting in to any of the programs. During that time, Sell worked for 14 months for Joy’s House, a nonprofit serving adults with life-altering diagnosis and learned lots about how nonprofits work. She decided to form Same as U to “serve young adults with developmental disabilities and help them live the life they imagine,” according to the organization’s website.

“If this was going to happen, I needed to dedicate myself full time for it,” Sell said.

Same as U launched Jan. 14. It is is open Tuesdays and Thursdays and operates out of White River Christian Church, 1685 N. 10th St.

Sell said there’s a very strong academic component to the program, and a typical day allows students to learn about subjects like history, art and science, among other topics.

“At 8:50 a.m., we head down to the classroom and have a morning full of academics, like math, language arts, science, history,” Sell said. “A lot of this population worked so hard and so long on academics, we know if they stop using these skills, they lose their skills. Dementia happens in this population more frequently, so we want to do everything we can to keep their brain active.”

In the afternoons, there’s exercise, enrichment time and electives such as art and other topics.

Sell said she can accommodate 12 to 15 students each day. Students can attend one or both days the school is open.

Sell chose to have the school only open twice a week because she doesn’t want to replace other opportunities students may have, like a job. 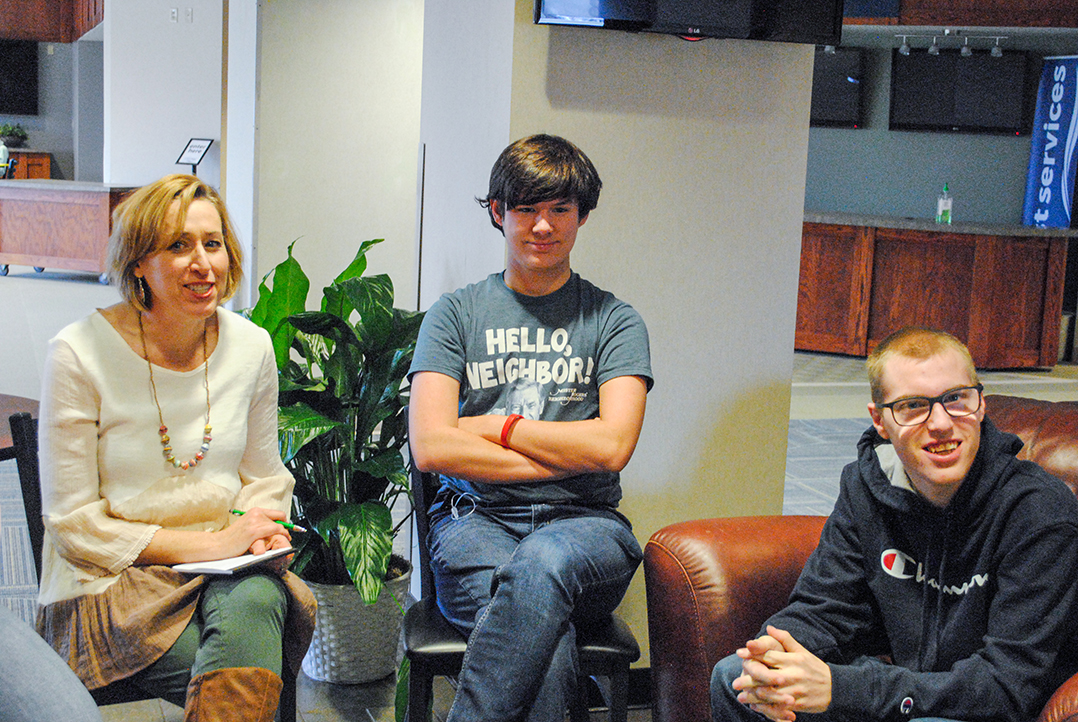 Jennifer Sell, left, conducts a class at Same as U with students Elliott Davis, center, and Chris Holleman. (Photo by Anna Skinner)

Jennifer Sell came up with Same as U’s name while watching her daughter, Jessica, at a track meet. Jessica was participating in Unified Track, where students with disabilities and students without compete together.
“Jessica was running relay, and she was standing next to her peer without a disability, and we were just in the bleachers watching, and she was looking at us and looking at her teammate, and it was like I got hit on the head with a 2-by-4 with the word ‘same,’” Sell said. “Although Jessica’s life looks very different than her sisters’ and her peers’, she wants and desires the same life they have. She fully anticipates having a full, bountiful life, so I thought, ‘That’s our name.’”