Numbers in one area of Hamilton County’s court system are rising in a positive way.

Since its founding in late 2015, the county’s Veterans Court, under the direction of Superior Court 3 Judge William Hughes, has helped nearly 75 military veterans struggling with mental health or substance abuse issues who have faced various criminal charges.

Hughes has been a judge in the county for more than 31 years, but he said the past 3 1/2 years have been some of his most rewarding.

“Justice Steve David of the (Indiana) Supreme Court is a veteran,” Hughes said. “I’ve known several other members of the judiciary who are vets. My brother-in-law is a vet, and my nephew is active duty. These are folks who are clearly significant in my life, so the idea of implementing a Veterans Court really spoke to me.”

Veterans Court is open to any Hamilton County veteran who was honorably discharged and whose case has been approved by the county prosecutor. Violent felonies are precluded.

Hughes said identifying veterans isn’t always easy. It’s not something that is asked when the court is collecting demographic information, and Hughes said offenders rarely share that they’re veterans. But a recent change that compares a Veterans Affairs database against the state’s court case management system is helping veterans learn about the program. 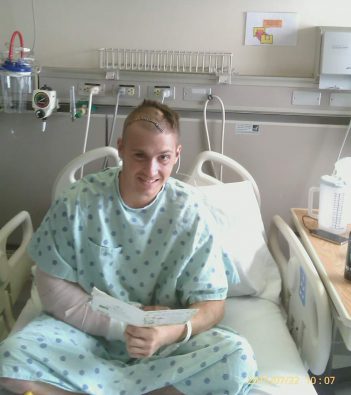 Cpl. Kyle Reynolds was medically discharged from the Marines after sustaining a traumatic brain injury in a car accident in 2012. (Submitted photo)

Cpl. Kyle Reynolds was among the first class of graduates from Veterans Court, spending more than two years in the program. Arrested five times in three years for charges stemming from alcohol abuse, Reynolds’ attorney referred him to the program before it technically began.

“For me, the point of Veterans Court was to keep me out of jail,” Reynolds said. “I think if you told anyone they had an alternative to going to jail, they’d check it out.”

A Noblesville native, Reynolds graduated from Noblesville High School in 2008, joining the Marines nearly immediately after in June 2008. In 2012, he was medically discharged following a car accident that left him with a traumatic brain injury and loss of central vision in his right eye.

“I was going back to base in Camp Lejuene in North Carolina. I was asleep in the passenger’s seat, my buddy was driving and the front driver’s side tire of my Jeep blew out going 65 mph,” Reynolds said. “The car rolled over on my side and continued rolling through a cornfield. None of my eight airbags came out, and then I sustained five fractures in my arm, two in my collarbone, one in my shoulder blade, fractures in my skull. I had what’s called an epidural hematoma, which is brain bleeding, which pulled my eye out of its socket. The optic nerves that lead from your eye to your brain started disconnecting.

“I was paralyzed in my arm for a year, and of course all the mental aspects that come with a traumatic brain injury I was trying to deal with, too – impulse-control issues, emotional instability issues,” he continued. “In the Marine Corps, it was fine to be like that. When someone pissed you off, it was fine to chew them out and let them know. I couldn’t do that outside the military.”

While he was still in the hospital, Reynolds’ Marine Corps command began medical separation paperwork.

“Between the brain injury, blindness in my right eye and paralyzed arm, they felt like there was nothing I could offer the Marine Corps and nothing they could offer me,” he said. “That stuck with me for a long time. Drinking only increased after the car accident.”

Married at the time, Reynolds also blames drinking for his divorce.

“I started really hitting the bottom of the barrel at this point, living with my parents, drinking all the time, harassing them,” he said. “They had to throw me in jail one time. I got arrested at a party because I was so drunk and got into a fight with a guy there. Then I got into a tangle with the officers. They Tased me. Those were the charges that got me into Veterans Court.

“Both charges involved some kind of an issue with an officer. I caught a felony intimidation charge and an assault charge.”

At first, Reynolds admits he didn’t take Veterans Court seriously, failing a drug test, arguing the frequency of the tests, etc. It wasn’t until the second phase of the program when he said he began to come to terms with his issues.

“I was just looking for issues to argue, not ready to join them yet,” he said. “After my first year, I moved into the second phase of the program and started classes. The first class, ‘Battling Shadows,’ talked all about mental illness. A lot of stuff I was talking about in the VA already, so I was a lot more open.”

Hughes said the only things that can keep a veteran out of Veterans Court are an unwillingness to take part in the program or a dishonorable discharge from the military.

“We found out that Hamilton County, at (the start of Veterans Court), had the second-largest VA-connected population in the state of Indiana,” Hughes said. “We didn’t realize that, so we figured there was probably a need. I dealt with domestic battery cases at that point, and I was seeing a lot of veterans coming back from Afghanistan and Iraq who were in there. I knew we had some issues. It became a journey. There was a bit of push back.

‘We haven’t given up on anybody’

Veterans working through the program work with Veterans Court staff to identify mental diagnoses, injuries and substance abuse issues before moving into educational and job counseling classes, solving housing issues and more. The program’s final phase is for each veteran to give back to the community and the program.

Hughes said the program can take anywhere between 18 months and three years to complete.

“We haven’t given up on anybody. We have had a few people violate (the terms of Veterans Court) because they didn’t want to be in the program, but generally, we believe that, to the extent that we can do something, we will,” Hughes said. “We haven’t had major issues with violations because we’re dealing with a population that are pro-social people who really want to get rid of their problems. Small sanctions and course adjustments usually are necessary, but we celebrate successes all the time.

“This is about positive reinforcement, making it so much different than every other criminal justice course. Problem-solving courts as a whole are. It works better to incentivize than to sanction.”

As of press time, Veterans Court has graduated 12, has 12 active members, three in the pipeline and approximately 10 on deck.