Lari White is eager for her friends and family to see her in a dramatic role.

“I felt I was getting pigeon-holed as a musical theater actress and I knew I was more than that, so I started doing more straight plays,” said White, whose given name is Larissa.

The 2012 Carmel High School graduate is playing Shelby, a Type 1 diabetic who suffers from kidney issues, in “Steel Magnolias” at Beef & Boards Dinner Theatre in Indianapolis. The show opens Jan. 4 and runs through Feb. 2. 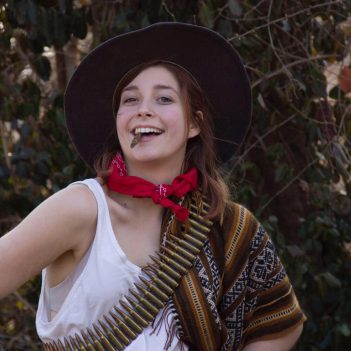 “The writer did such a wonderful job of painting a really realistic mother/daughter relationship, all the ups and downs,” said White, who is based in St. Louis. “I’m glad to be able to come home and make my parents cry. That will be good.”

White graduated from Webster University in 2016 with a major in scriptwriting with a minor in film production and professional writing. She worked at Urban Chestnut Brewery Company, teaching craft beer classes and giving tours.

“It was a job to pay rent but I kind of fell in love with it because the community is so tight, especially in St. Louis,” White said.

She also worked for New Line Theatre in St. Louis at the same time. She did 10 shows in four years.

“They do a bunch of newer musicals, so I got my first professional role there,” she said. “I played Bonnie Parker in ‘Bonnie & Clyde,’ a musical. It’s a nice, 150-seat theater. It’s more intimate acting.”

White, who has her equity acting card, began pursuing acting full-time in May.

“I also work as casting director and work as a producer for a production on commercial,” White said.

White has some projects set for the first several months of 2020, including a TV show she can’t discuss the specifics of.

During college, White had a leading role in the 2016 horror movie, “Tonight She Comes.”

“That was an experience, long days,” she said. “I was in school, taking 19 credit hours, doing a show and doing the film shoot.”

“A guy walked by and I thought he was going to ask for change,” White said. “I started to say, ‘I don’t have any,’ and I saw he had a gun. I had been gifted a taser. I was taking my purse and my other hand was going in my pocket for a taser. All of sudden, I had the gun placed against my forehead and he said, ‘Don’t try anything silly.’

“I thought what a way to make me seem like a child, but I’m the one who brought a taser to a gunfight. He took off with my purse, which was fine because I only had a lucky $2 bill and my phone that was old and broken.”

White said feeling the cold muzzle of a gun shattered any sense of security she had.

“It wrecked me,” White said. “I got really sad. I went to a counselor for trauma. After I watched the entire eight seasons of ‘America’s Next Top Model,’ it hit me (that) I had to get over it, and I ended up writing and doing a cabaret called ‘Lari King Live: At Gunpoint.’ It was a comedic take with songs.”

In May, her car was hit by a truck head-on at 40 mph and pushed onto the sidewalk. The truck driver tried to get away but ended up crashing.

“I didn’t feel anything, but the car looks like I should have felt something,” she said.

Unlike the gun incident, White was simply mad she had to get a new car.

“I feel like I’ve built up these nerves of steel,” said White, who now plans a cabaret, “Lari King Live: At the Scene of the Accident” in 2020.