You are at:Home»Current in Carmel»Carmel Business Local»Mudbugs’ owners close restaurant to spend more time with grandkids

For Roy and Belinda LeBlanc, the time was right to step away from Mudbugs Cajun Cafe.

“Time was the top factor in closing, since Belinda and I only have Sundays free,” Roy LeBlanc said. “We love spending time with our grandkids, and they’re growing up too fast.” 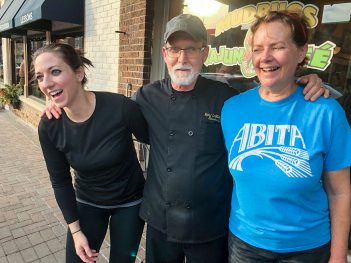 The restaurant, owned by the couple and their daughter, Kelly Frost, opened in April 2007 at 20 W. Main St. in the Carmel Arts and Design District. Another daughter, Elise May, occasionally helped out in the business.

Mudbugs closed Dec. 26. Little Cairo, featuring Mediterranean food, is expected to open in the space in approximately a month.

“It’s hard to believe 14 years ago we were in our home, testing potential recipes on family and friends to figure out what to put on the menu,” LeBlanc said. “We still experimented with new items later, like the chicken courtbouillon and black-eyed pea jambalaya, but at that point we were comfortable enough with our regulars to let us know what was working and what wasn’t.”

LeBlanc had just cooked for family and friends before Jerry and Monica Urick of Urick Concessions approached him about cooking for a new Cajun trailer.

“And this was before specialty food trucks became common in Indiana, so we had no idea how it would do,” LeBalanc said.

LeBlanc isn’t sure if they are fully retired.

“Several customers and investors have reached out about other opportunities that wouldn’t require a full-time commitment, so we’ll see if it leads to anything in the future,” he said.

LeBlanc said he will mostly miss the customers, their stories, and the people who are die-hard about Cajun food.

“They’re like sports fans: once they have a favorite Cajun dish, cooking style or restaurant, they’ll support and defend it forever,” he said. “And as a restaurant owner, there’s no better feeling than having people that loyal about you and your food.”